5-star Davis enjoying Opening Finals experience, on and off field

5-star Davis enjoying Opening Finals experience, on and off field

Five-star Clemson commitment Fred Davis has been enjoying his experience at The Opening Finals, both on and off the field.

On it, the elite cornerback prospect from Jacksonville (Trinity Christian Academy) has performed well while matching up against some of the nation’s other top prospects.

Davis (6-1, 185) said the best receiver he has faced this week is a fellow South Florida native, four-star Marcus Rosemy from Fort Lauderdale (St. Thomas Aquinas), who is committed to Georgia. 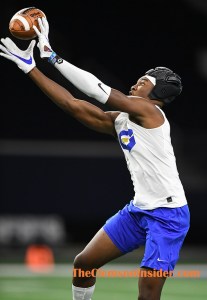 “It’s been great going against some top guys,” Davis told The Clemson Insider. “I’ve been holding my own, so it’s been a great experience. The players are great and having a good time out here.”

Off the field, Davis has had a blast spending time with the group of his future Tiger teammates that attended The Opening Finals in Frisco, Texas.

Davis described the bond between the commits in Clemson’s top-ranked 2020 class as “real strong.”

“We have a group chat, so we’re just talking back and forth every day, then we got here to really spend some days with each other in person,” he said. “So, it’s been good.”

Davis, who committed to Clemson in April, is the No. 3 cornerback and No. 30 overall prospect in the 2020 class according to the 247Sports Composite rankings. He plans to visit Clemson again for the All In Cookout in late July.