Dabo Swinney has said it before — no one on his staff is stingier with a scholarship offer than running backs coach Tony Elliott.

Elliott does his due diligence when evaluating prospects and takes his time before pulling the trigger on an offer. If you’re a running back and you receive an offer from Clemson, that means you’ve really earned it.

One strong offer candidate in the 2021 class is four-star Cody Brown, who is considered a top-five running back and top-100 overall national prospect in the next cycle.

The Lilburn (Ga.) Parkview standout camped at Clemson in June and is drawing substantial interest from the Tigers. He is high on Clemson, too, and would love to have the opportunity to play for Elliott and Swinney. 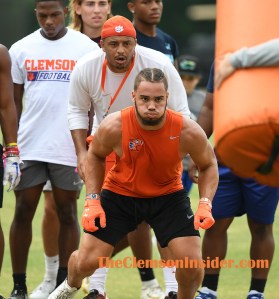 “Coach Elliott is a guy I would play for and a guy I would really to get to know,” Brown said. “And there’s not enough good things to say about Coach Swinney.”

Brown (6-0, 210) enjoyed his experience on campus last month and said he is “definitely” considering another visit to Clemson during the upcoming season.

“The culture there is definitely one of a kind,” he said. “The coaches’ attitudes and intentions are for the best of the players.”

A bevy of big-time programs have already extended offers to Brown, including Auburn, Florida, Georgia, LSU, Ohio State, Penn State and Tennessee. He feels that a lot of schools are recruiting him hard right now, but especially one.

“All about the same at the moment,” he said. “Ohio State State would be the one that shows the most.”

Brown says he’s too early in the recruiting process to name favorites right now and doesn’t have a timeline for his commitment decision.

“I’ll know the time is right to commit when I know I feel at home at whatever school I choose,” he said.

Brown has also visited Auburn and Georgia this summer. He is slated to visit Ohio State at the end of July.