Brent Venables is used to seeing someone like a Ben Boulware, Christian Wilkins or a Clelin Ferrell reviewing and going over film as if their lives depended on it.

In those cases, they were upperclassmen or cared a great deal and wanted to do everything they could to make themselves and their team better.

However, what Clemson’s defensive coordinator isn’t used to seeing is a true freshman doing those same things and doing it in the spring. But that was the case this past spring with freshman defensive tackle Tyler Davis. 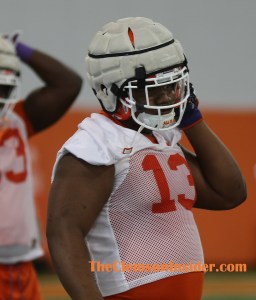 Clemson freshman Tyler Davis was one of the more talked about players for the Tigers this past spring. (photos by Robert MacRae and Bart Boatwright/The Clemson Insider)

According to Venables, Davis was not only watching tape himself, but he had the other true freshmen defensive linemen, such as Etinosa Reuben and Ruke Orhorhoro, studying tape on their free time as well.

Defensive end Xavier Thomas says Davis has brought that type of intensity every day since he stepped foot on campus back in January.

“You would think he is a veteran,” Thomas said. “When he came in, a freshman does not really know what to do that much, but he came in, put his head down and he has been grinding. He just studied his playbook a lot.”

And that got the coaches’ attention. Venables and head coach Dabo Swinney raved about the 6-foot-1, 290-pound freshman’s work ethic as much as they did his talent.

Davis’ teammates, they could not stop talking about him.

“He is a freak. There is something about him,” right guard Gage Cervenka said. “You can definitely tell that he loves the game. He came in and he already knows what is going on. You can see that there is something different with him.

“We kind of like to call him ‘Baby Dex’ because he looks like a little ‘Baby Dex.’ He is a little bit smaller, but he is strong, and he is fast. He is going to be a great player. I am looking forward to seeing what he has got.”

Thomas says the most impressive part about Davis has been his ability to already know the playbook.

“The playbook is not easy to learn,” Thomas said. “He came in and he has been causing havoc. He is a great guy.”

And Davis sounds like a guy that could be a great fit for a Clemson defensive line that is not only replacing four starters, but four All-Americans, too.

The Tigers will begin fall camp at the end of the month.