Elite 2021 wideout high on the Tigers

Elite 2021 wideout high on the Tigers

Per usual each summer, many of the country’s top prospects made their way to Clemson for the Dabo Swinney Football Camp in June.

One of the best wide receiver prospects that participated in the camp was Athens (Ga.) Academy standout Deion Colzie. The 6-foot-4, 185-pound rising junior is ranked as one of the top 50 overall prospects in the nation in the class of 2021.

TCI recently caught up with Colzie about his camp experience, interest in the Tigers and more.

“It was great,” he said. “I got to do the camp and a tour after the camp. Then to finish it all I sat down and talked to Coach (Jeff) Scott.” 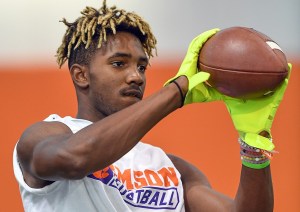 During their one-on-one conversation, Scott let Colzie know that he and the Tigers are interested in recruiting him. Colzie expects to be in contact with Scott after Sept. 1, when Division I college coaches can start actively recruiting junior prospects.

“We talked about the whole recruiting process and what the steps are moving forward,” Colzie said. “He told me that I was one of the guys he was going after and we would talk more after September 1st.”

According to Colzie, he is keeping all of his options open at this time but made it clear that his interest in the Tigers is “extremely high.”

“I like the atmosphere at Clemson and how they get after it,” he said. “They have a championship-team work ethic. I’m still looking into all schools right now but Clemson is definitely high on the list. As of now Clemson would be one of the top schools of mine if they offered me.”