Bowman’s trainer knew he would be ‘something special’

Bowman’s trainer knew he would be ‘something special’

Roger Mack has worked with a number of standout football players from the Sunshine State throughout his career as a personal trainer, such as former Florida and current NFL offensive linemen Mike and Maurkice Pouncey, former Florida running back Chris Rainey, and current Florida tight end Keon Zipperer.

Mack has also been training Lakeland (Fla.) five-star running back and Clemson commit Demarkcus Bowman since he was in the 10th grade.

The Clemson Insider traveled to watch Bowman play in the 2019 Kickoff Classic last Friday at Lakeland’s Bryant Stadium as part of our Tour of Champions. While there, we spoke with Mack about Bowman. 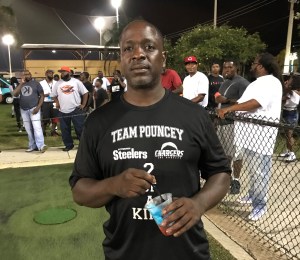 “It started out at Gold’s Gym, but it’s now Just Move gym,” Mack said of their training together. “The kid, he started out in it. He was the youngest of all the bunch, but he worked hard. He was determined. Everybody used to pick on him and everything, but he wanted it real bad. There’re some things you can’t teach in a person, and that’s the will and desire. He had the will to want to be great.”

Mack says he knew Bowman was going to be a special player as they trained together last summer heading into his junior season.

The No. 2 running back in the 2021 class, per the 247Sports Composite rankings, went on to rush for 2,422 yards and 36 touchdowns as a junior while leading Lakeland High School to the Class 7A state championship last year.

“I started seeing that he was going to be something special the summer of last year before the season started,” Mack said. “He really bought in and he really wanted to work out hard. He was adamant about working on his legs and hitting the legs on leg day. He was adamant about working hard, and there’s times when he’s supposed to do 10 reps, he’ll do 15 reps. He’ll get on the leg press, he’s supposed to do 10 reps, he’ll do 15. Calf raises, instead of doing 10, he’ll do 20.

“He was relentless at it, man. He worked real hard. You have to give God the honor, the glory and the praises, and the kid, because the kid works hard.”

Bowman will move on to Clemson next year, and Mack is excited to see what he blossoms into under the tutelage of running backs coach Tony Elliott.

“From what I hear Bowman say, he’s a guy that he believes in that can help him to achieve his goals — to play and become a better football player,” Mack said. “He likes the relationship that he’s got with Coach Elliott, from talking to Demarkcus. So, all I want him to do is get up there, listen to coach Elliott and work hard — be a sponge, soak up everything he can from Coach Elliott and be ready to learn at all times.”