Tigers in good spot with OL teammate of Clemson commit

Tigers in good spot with OL teammate of Clemson commit

Clemson is a strong contender in the recruitment of Jager Burton, the No. 1-ranked prospect in the state of Kentucky and one of the top offensive linemen in the class of 2021.

Burton is teammates with Tigers’ O-line commit Walker Parks at Frederick Douglass High School in Lexington. The two have visited Clemson together on a couple of occasions, and they intend to return to Death Valley on Sept. 7 for the game vs. Texas A&M.

“That’s the plan,” Burton told TCI. “I can’t wait. It’s definitely one of those games highlighted that I can’t wait to go to, especially since Walker is coming with me.” 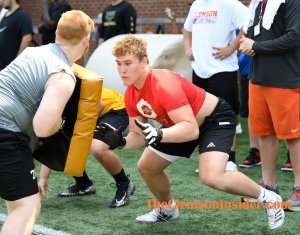 Burton previously visited Clemson in June to participate in the Dabo Swinney Camp, after which he picked up an offer from the Tigers. He has more than a dozen offers altogether, including Alabama, Kentucky, Ohio State, Florida State, Louisville, Tennessee and Penn State among others.

The 6-foot-4, 280-pounder is also planning to check out games at several other schools during the 2019 college football season.

“I’m going to a lot this year,” he said. “I’m actually going to watch Louisville vs. Clemson at Louisville (on Oct. 19).”

As for Clemson vs. A&M, Burton doesn’t see the Week 2 matchup being particularly close.

“I think Clemson will win pretty easily,” he said.

Burton says it is hard to tell which schools are showing him the most interest right now, as college coaches aren’t allowed to actively begin contacting 2021 prospects until Sept. 1.

“Everyone is sending as much stuff as they legally can,” he said. “I’m sure Sept. 1 will be a really busy day.”

Burton would ideally like to have his recruitment wrapped up before his senior season begins in 2020. Heading into his junior season this year, the Tigers are in a good spot.

“Definitely towards the top of my list,” he said.

Burton is the top-ranked prospect in the state of Kentucky for the 2021 class per 247Sports, while Rivals ranks him as the No. 6 offensive guard and No. 132 overall prospect nationally regardless of position.