As he waits to see how things go in the XFL, Pagano loves coaching at Daniel

As he waits to see how things go in the XFL, Pagano loves coaching at Daniel

When his playing career is over, Scott Pagano wants to coach the game he loves so much. So, when his former Clemson teammate, Tyrone Crowder, asked him to come by one afternoon and check things out at nearby Daniel High School, Pagano did.

Crowder is in his second season at Daniel as the Lions’ offensive line coach and knew his team could use Pagano’s help.

“When I checked it out, I loved it,” Clemson’s former defensive tackle said. “I like being around the guys, teaching them and coaching them any way I can. It has been fun.”

Pagano is a volunteer coach at Daniel this year, assisting head coach Jeff Fruster with the defensive line. Friday night, he helped the Lions’ defense preserve a shutout, as they beat Liberty High School, 44-0, to open the 2019 season.

“Daniel is right down the road from where I live. So, I figured I could help them out any way possible just to still be around football and to help the guys and the coaches and try to give them some of my knowledge that I have learned from Clemson,” he said.

Pagano learned and experienced a lot with the Tigers’ program. He lettered at Clemson from 2014-’16 and was a member of Clemson’s 2016 National Championship team. In his last season in Tigertown, the 6-foot-4, 280-pound defensive tackle tallied 31 tackles, 4.5 tackles for loss and two sacks. He started four games that season. He played in 31 games overall in his Clemson career. 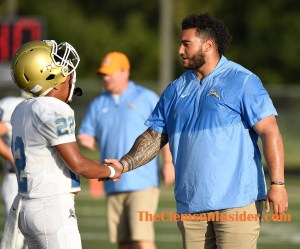 After graduating from Clemson in 2017, Pagano left Clemson and transferred to Oregon where he finished his college football career. Pagano came back to the Clemson area so he could train and be close to his family, which lives in Six Mile.

Pagano still has a passion for the game of football, which still drives him to live out his dream to be a professional football player. He was recently invited to an XFL Showcase in Washington, D.C., which earned him a spot in the new league’s draft pool.

The XFL will hold its draft in October and then in December Pagano will leave for minicamp.

“I just want to play football, so I am excited,” he said.

But until that happens, the former Tiger is enjoying his time with the Lions and coaching football.

“I think it is just the passion of the game and the love I have for it,” Pagano said. “I want to help the younger guys out. I have been in their shoes before. I want to help them and show them the right way to do things and help them grow in life as well.”

He is enjoying the fact he is giving a little bit back, too.

“I am just serving the guys and trying my best to pour into them the things that have been poured into me. It has been fun,” Pagano said.

“Coaching football after I am done playing football has always been a priority. I am glad I am starting it off at Daniel High School.”

Daniel High School is too.