Crowder enjoying his career as a high school football coach

Like anyone that has played college football at the highest level, Tyrone Crowder dreamed of playing in the NFL. And, in the spring of 2018, he got his opportunity.

But life sometimes has a funny way of working out. Though Crowder wanted to be an NFL player, life wanted him to be something else, maybe even something more.

After being invited to the Cincinnati Bengals rookie camp that April, Crowder was released and all of sudden he found himself not playing the game he has played for the majority of his life.

But then fate stepped in. Crowder, who still was under his lease at his Clemson apartment, returned to Tigertown trying to figure out what was next. What he did not know was his old head coach, Dabo Swinney, was working behind the scenes at Daniel High School to get him a job.

The Lions were looking for an offensive line coach and Swinney knew Crowder would be a perfect fit at Daniel.

“Coach Swinney reached out and Coach (Jeff) Fruster called me and asked was I interested,” Crowder recalled. “I had not really thought about coaching right away. But I was like, ‘You know what, I am going to give this a shot.’ Right now, it has really kind of worked out and I am really enjoying it.” 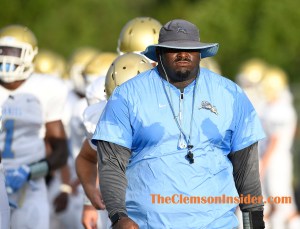 Crowder is now in his second year at Daniel. The former Clemson offensive lineman teaches at the local middle school in Clemson and is a full-time assistant coach on Fruster’s staff. This past Friday, he and the Lions opened the 2019 season with a 44-0 victory at Liberty High School in Liberty, South Carolina.

“I am enjoying it. It is just something that happened,” said Crowder, who played at Clemson from 2014-’17 and was a starter on the Tigers’ national championship team in 2016. “Like Coach Swinney was talking about, he said things just kind of work out in mysterious ways. I am really enjoying coaching. Hopefully, in the long run, it is going to work out to something bigger, but right now, I am kind of blooming where I am planted right here at Daniel.”

Crowder says he has a great group of kids to coach. This year’s offensive line is young compared to last year’s unit which had four seniors.

“So, I am only returning one starter. Right now, I am really trying to better those young guys,” he said. “I am really enjoying this.”

He is enjoying it so much, Crowder says his playing days are over. His focus is now on helping Daniel win another region championship and possibly play for a state title. More importantly, he just loves to coach.

“Right now, I am really enjoying this coaching and coaching life,” he said. “I’m really just trying to see where it goes.”