3 defensive stops that should have Clemson’s opponents concerned

3 defensive stops that should have Clemson’s opponents concerned

Very encouraging sign in first game without the Power Rangers

Were we surprised by Clemson’s dominant offensive performance in Thursday’s 52-14 victory over Georgia Tech?

The offense did what we thought it would do. The top-ranked Tigers tallied 632 yards, the most ever against the Yellow Jackets. They rushed for 411, the most against Tech since John Heisman’s 1903 Tigers beat the Jackets, 73-0.

Again, none of that should have surprised any of us.

However, you know what was surprising … the way Clemson’s defense played.

It’s not that holding Georgia Tech to 294 yards was shocking. I think we all expected the Tigers to control the game, especially considering new Yellow Jackets head coach, Geoff Collins, was breaking in a new offense and was still looking for a quarterback.

Though it had a new offense and tried to spread the Tigers out, Tech looked like a its old self. It was still led by its running game, 157 yards on 45 carries. Actually, this year’s Jackets’ ran for 11 more yards against Clemson than Paul Johnson’s triple option attack did in last year’s game and did it in 11 less carries.

No, the surprising part about the defense’s performance on Thursday was its fortitude.

Two times Georgia Tech turned the Tigers over on the plus-50, including one at the 2-yard line. However, in both instances, the Yellow Jackets came away with no points. 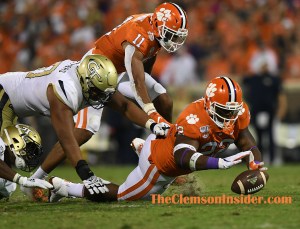 After a Travis Etienne first-quarter fumble at the Clemson 41, the defense forced a three-and-out and Tech’s punt hit the front left pylon of the end zone for a touchback. The net gain was just 20 yards. On the next play, following a holding penalty, Etienne broke off his record tying 90-yard touchdown run to give the Tigers a 14-0 lead.

In the second quarter, Trevor Lawrence was fooled for perhaps the first time in his career when Tre Swilling stepped in front of his pass and returned it 41 yards to the Clemson 2-yard line. To Lawrence’s credit, he chased down Swilling and knocked him out of bounds before he crossed the goal line, allowing his defense again the opportunity to show how tough it can be after a sudden change of possession.

Again, Clemson’s defense bowed up, which was a surprise, considering its new defensive line and new linebackers was going against an offense whose strength was running the football.

The Yellow Jackets tried to pound the ball in the end zone twice with its 6-foot-2, 200-pound quarterback in Tobias Oliver, but he had no success. On third down, they handed the ball to their bruising running back, Jordan Mason, but he was held to no gain.

On fourth-and-goal from the one, Oliver rolled to his right and tried to get the ball to his tight end in the corner of the end zone, but linebacker James Skalski got his right hand on the ball, knocking it in the air where safety Denzel Johnson intercepted the ball at the goal line and returned six yards to the Clemson 6.

Five plays later, Lawrence redeemed himself with a 62-yard touchdown pass to Tee Higgins to give the Tigers a 28-0 lead with 4:34 to play in the half.

The possession before their goal line stand, the Tigers stopped Mason for no gain on fourth-and-one from the Clemson 36. Tech finished the night 0-for-2 on fourth down conversions.

The Tigers also forced four turnovers, something a Clemson defense had not done since Oct. 3, 2015, when Clemson forced four turnovers against Notre Dame in a 24-22 victory. It also held the Yellow Jackets to 5 of 16 on third down, had 8 tackles behind the line of scrimmage and three sacks.

And though those kinds of numbers are expected from a Brent Venables’ defense, to see this defense, in its first game without the Power Rangers, make those kinds of stops in those situations, it is very encouraging for the rest of the season.