The 6-foot-6, 215-pound high school junior holds the only offer Clemson has extended to a tight end prospect in the class of 2021 thus far. He earned the offer in June after competing at the Dabo Swinney Camp and working out with tight ends coach Danny Pearman.

The Clemson Insider caught up with Briningstool to get his reaction to Saturday’s visit.

“I loved it!” he said. “I had a great time hanging around the team in the locker room and talking to Coach Swinney and Coach Pearman.”

Briningstool was shown a lot of love from Swinney and Pearman while on campus.

“They just told me how well I’d fit in here at Clemson and how important I am to them and making sure that I know that I’m a priority,” Briningstool said. “Overall we had a great conversation and I really enjoyed my time (at Clemson).” 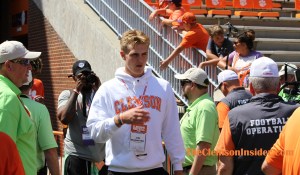 Swinney and Clemson’s staff have built a strong bond with Briningstool.

“I love Coach Swinney,” he said. “He’s a great man and a great coach. Jesus is a big part of the program and I really like that. My relationship with the staff is great and we’re really close. The staff treats my whole family very well and I really value the importance of that.”

More than 81,000 fans packed Death Valley to cheer on the Tigers during Saturday’s 24-10 win over the Aggies, and Briningstool came away impressed by the atmosphere.

“The highlight of my visit was seeing Death Valley in live action,” he said. “The stadium and the fans and the energy in the stadium was electric. It’s a special place and there’s nothing like it!”

In addition to Clemson, Briningstool boasts offers from Alabama, Georgia, Michigan, Michigan State, Penn State and Texas A&M, among others.

Did his visit to Clemson get him any closer to making a commitment?

“I had a great time and really got a good feel for the program from the inside out,” he said, “but my timeframe is still the same, sometime later on this season hopefully I’ll make a decision.”

Briningstool is ranked as the No. 2 tight end and No. 109 overall prospect in the 2021 class according to the 247Sports Composite. He is the son of former Michigan State linebacker Tony Briningstool, who played for the Spartans in the late ‘80s-early ‘90s.