When you watch him play, it’s easy to see why Will Shipley of Matthews (N.C.) Weddington is being recruited by Clemson and a bunch of other major college football programs across the country.

The five-star prospect is a versatile weapon out of the backfield with his speed, ability to run the ball and also pose threat in the passing game, hence why he is ranked as the nation’s No. 1 all-purpose back in the class of 2021.

The Clemson Insider attended Shipley’s game last Friday night as part of our Tour of Champions and caught up with Weddington head coach Andy Capone about his star player afterward.

“He’s unbelievable to coach,” Capone said. “On the field, you can see what he does. But off the field, he’s even a better kid and person and a hard worker. But it makes it a lot of fun as an offensive play-caller to be able to move a kid like that around and see what defenses do to try and prepare for all that stuff. So, it’s a lot of fun.” 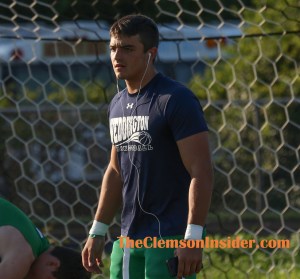 As Capone alluded to, Shipley has the type of character that Clemson looks for and values in its recruits. That translates onto the field, where Shipley serves as a leader that his teammates have a lot of respect for.

“Everybody follows suit with Will,” Capone said. “He’s one of our hardest workers in the weight room. Everybody looks up to Will and rightfully so. He’s everybody’s biggest cheerleader, and I’m just excited to have him for two more years.”

Shipley was offered by Clemson this summer after working out at the Dabo Swinney Camp. The 5-foot-11, 200-pounder — who models his game after Carolina Panthers running back Christian McCaffrey — also has offers from NC State, Notre Dame, Stanford, Ohio State, Penn State and many others.

A junior, Shipley is still a ways away from making his decision but hopes to commit before next summer.

Whichever school ultimately lands Shipley will be getting a “game changer” according to Capone.

“He’s a kid that’s going to give you everything he has in the classroom and the weight room and all that. But he’s a game changer,” Capone said. “He’s dynamic. He can catch the ball, he can run the ball, he can do anything you ask him to do, and I think he’s going to continue to get better because he’s passionate about the game and he wants to be the best. I don’t see anything slowing him down from becoming a guy that contributes early and often for wherever he ends up going.”

Shipley is coming off an unofficial visit to Clemson for the Texas A&M game on Saturday and is scheduled to visit Notre Dame for its game against Southern Cal on Oct. 12. Shipley is also looking to attend NC State’s home game versus Clemson on Nov. 9 and told TCI he is considering a trip to Virginia for its contest with Florida State this Saturday.