The class of 2021 recruit had been eager to experience a game at Death Valley for the first time, and he certainly wasn’t disappointed by the atmosphere during the Tigers’ 24-10 win over Texas A&M.

“It was great. The atmosphere was great,” Washington told The Clemson Insider. “I’ve never been in such a loud stadium.”

Washington, a power conference recruit with several offers, said the highlight of his unofficial visit to Clemson was “getting to go in the locker room and seeing the excitement from the players and coaches.” 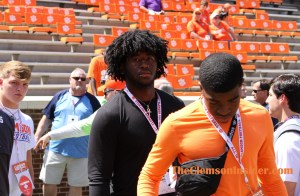 “They said they were glad I was down there and just that they’d love to have me back, and we talked football,” Washington said. “Just the usual.”

Washington holds offers from Auburn, North Carolina, Tennessee and Virginia Tech, while a number of other schools are showing interest, and his list of college options figures to grow moving forward.

A scholarship offer from Clemson is significant for any prospect that receives one, especially considering the program’s elite status and fact that the Tigers are very selective in extending offers.

But Washington explained why an offer of Clemson’s magnitude would really mean a lot to him.

Looking ahead, Washington named Auburn, Tennessee, Virginia Tech, Alabama, Kentucky, Maryland and Mississippi State as some of the other schools he wants to visit this season.

Prior to this past weekend, Washington previously visited Clemson for the Dabo Swinney Camp in June after being invited by the staff to participate.

As a sophomore last season, Washington tallied 89 total tackles including 12 for loss and four sacks.