Ennis caught touchdown passes of 29 and 62 yards in the second quarter and also rushed for a 4-yard score in the fourth quarter. In addition, the 6-foot-4, 225-pound prospect recorded another long reception of 20-plus yards.

After the game, The Clemson Insider caught up with Ennis about his breakout performance. 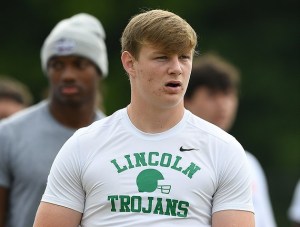 “It was a good feeling,” he said. “I kind of went through a dry spell. Teams had been double covering me, which that just opens it up for everybody else and for them to have a big game. And this game, they didn’t really try to double cover me, and I was just able to make plays and do my best. When I was blocking, I blocked my hardest and got a couple pancakes, and it felt great to have a good performance like that.”

The individual effort felt even better for Ennis as it helped his team earn a big victory.

“It was great because at this point right now we’re kind of in the driver’s seat, 2-0, in district,” he said. “By no means, it wasn’t a perfect game. We’ve got stuff to still work on, but it was a solid win.”

“He tells me I look like I’m having fun and I’m doing a great job,” Ennis said, “so that’s always good to hear.”

Ennis hopes to make an official visit to Clemson the weekend of the Tigers’ game versus Wake Forest on Nov. 16.