GAITHERSBURG, Md. – After landing a commitment from Damascus (Md.) five-star defensive lineman Bryan Bresee in the 2020 class, Clemson is trying to get one of Bresee’s talented teammates on board in the next cycle: Ryan Linthicum, the No. 1-ranked offensive center in the 2021 class.

The Clemson Insider attended Damascus’s game at Quince Orchard High in Gaithersburg, Maryland, on Friday night to see Bresee and Linthicum play as part of our Tour of Champions and spoke with Linthicum after the game.

Linthicum (6-4, 300) is set to visit Clemson with Bresee for the game against Charlotte on Sept. 21. 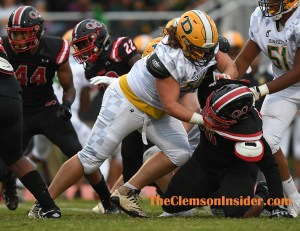 “I can’t wait to bond with all the coaches, (offensive line) coach (Robbie) Caldwell and all the recruits,” Linthicum told TCI. “I’m going down with Bryan, too, so it’s going to be a fun time.”

Linthicum, who received an offer from Clemson after competing at the Dabo Swinney Camp in June, has a lot of respect for Caldwell.

Linthicum recently announced a top three of Clemson, Michigan and Virginia Tech via social media and is looking to commit after his junior season.

“I’m just focusing on the season, really staying off social media for now,” he said. “But I’ll probably make a decision after the season.”

Where do the Tigers stand with Linthicum heading into his visit to Clemson next weekend?

“They stand very high with me,” he said. “I love Coach Caldwell, I love Coach Swinney and just love the environment down there. Can’t wait to get back and enjoy the atmosphere.”

Linthicum told TCI that he may also attend Michigan’s game versus Ohio State on Nov. 30, as well as a game at Oklahoma in October.