Nation's No. 1 center gives the latest after Clemson visit

Nation's No. 1 center gives the latest after Clemson visit

Clemson’s guest list of recruits for Saturday’s game against Charlotte was headlined by the top-ranked center in the 2021 class, Ryan Linthicum of Damascus, Maryland.

Linthicum (6-4, 300) made the trip to Tigertown with his Damascus High School teammate and five-star Clemson commit Bryan Bresee.

The Clemson Insider caught up with Linthicum to get the latest after his visit to Death Valley. 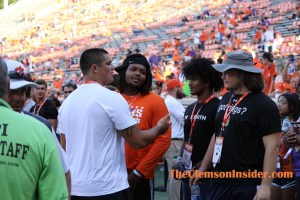 Linthicum hung around with Bresee and Clemson commits Mitchell Mayes and Sergio Allen while on the field prior to the Tigers’ 52-10 win over the 49ers.

“Love them,” Linthicum said Mayes and Allen. “They’re so down to earth and it was so cool to talk to them.”

Linthicum also had a chance to spend quality time with head coach Dabo Swinney and his staff while on campus.

“I love Coach Swinney,” Linthicum said. “He’s such an awesome guy, and Coach (Robbie) Caldwell. (I would) love to play for them.”

In late August, Linthicum announced that Clemson, Michigan and Virginia Tech were his top three schools. He told The Clemson Insider recently that he was looking to make his decision after this season.

Did Linthicum’s visit to Clemson over the weekend help the Tigers’ chances of landing his commitment?

Linthicum told TCI that he isn’t sure which school he will visit next but plans to return to Clemson soon.