Clemson ‘so close to becoming a reality’ for Mayes

Clemson ‘so close to becoming a reality’ for Mayes

Several of Clemson’s commits in the 2020 class made their way to Death Valley last Saturday to see the top-ranked Tigers play Charlotte, including five-star offensive lineman Mitchell Mayes.

“It was a great time back in Tigertown,” Mayes told TCI. “It was the first time I’ve been down this football season, so it was very exciting.”

Mayes, a senior from Leesville Road High School in Raleigh, North Carolina, liked how the Tigers looked during their 52-10 win over the 49ers.

“I thought they played great,” he said. “The offense is filled with ballers and has been doing very well.” 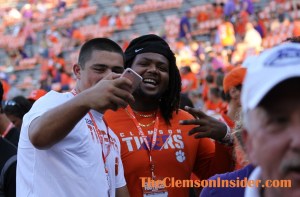 Mayes (6-4, 315) has built a strong relationship with offensive line coach Robbie Caldwell and Clemson’s staff, and had another chance to be around the coaches Saturday.

“They are excited for the months ahead and January will be here in no time!” Mayes said of what he heard from the coaches.

Mayes remains on track to enroll early at Clemson this coming January and can hardly believe that he is just a few months away from the beginning of his career as a Tiger.

“It is insane to think about,” said Mayes, who committed to Clemson this past spring. “It’s so close to becoming a reality. I am speechless how excited I am.”

Mayes is considered a five-star prospect by ESPN, which ranks him as the No. 1 offensive tackle and No. 13 overall prospect in the class of 2020 regardless of position.