How much is Clemson missing Hunter Renfrow?

How much is Clemson missing Hunter Renfrow?

Through 5 games this season, Tigers’ short-to-intermediate passing game does not really exist

As Clemson attempts to figure out how to be more efficient offensively in its first off week of the 2019 season, the answer as to what is missing in the Clemson offense this year is a simple one … Hunter Renfrow.

The Tigers’ short-to-intermediate passing game has been virtually non-existent through the first five weeks of the season. In 2018, Clemson averaged 7.4 yards per attempt on passes thrown from 1-10 yards. So far this year, on those same pass attempts, it is averaging just 2.7 yards.

From 2015 to 2018, Renfrow was Deshaun Watson’s, Kelly Bryant’s and Trevor Lawrence’s security blank on high percentage throws. No matter the coverage, not matter the down and distance, Renfrow always seemed to come up with that big catch, especially on third down.

“We got a lot of receivers I can trust for sure on third down or whatever it is,” Lawrence said recently.

But in the short passing game, those receivers are not making the same kinds of plays Renfrow was making. Granted that can be contributed to a lot of different things, such as coverages, defenses are doing. However, the fact of the matter is, the intermediate passing game is not there right now.

Not only is Clemson missing Renfrow, but it is also missing the tight end. Of course, the tight end position has not been as productive in the passing game since Jordan Leggett graduate in 2016. The coaches were hoping Braden Galloway was going to take the next step to be that guy before the NCAA upheld its year-long suspension this summer after the sophomore tested positive for a banned substance prior to last year’s Cotton Bowl.

Co-offensive coordinators Tony Elliott and Jeff Scott have tried to get tight end J.C. Chalk more involved in the passing game in recent weeks, but so far it has not caught on. Though Chalk did catch a critical third-and-three pass for six yards on the Tigers’ game-winning drive last Saturday at North Carolina.

“There wasn’t anything in the middle of the field against (North Carolina). That was not going to happen,” Clemson head coach Dabo Swinney said. “They were playing down low and they were trying to take away all the RPOs off the running game and blow those things up.

“So, the throws were outside.”

However, Clemson did get a few opportunities to make some plays in the short passing game, but it did not execute.

“We missed an opportunity on a slant. We had had a great play set up there and the ball got batted down because we didn’t get our hands down,” Swinney said. “That was a poor protection call on our part, too, as coaches.

“Then we had another play where we did catch them in the right coverage, and we had Tee (Higgins) open and we don’t make the play because our protection is not good at running back. Our quarterback kind of got spooked out of it.” 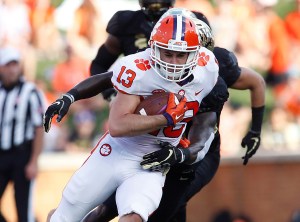 So far, through the first five games, the three guys who have played Renfrow’s slot position—Amari Rodgers, Diondre Overton and Cornell Powell—have combined for 17 catches for 176 yards and 3 touchdowns. Of course, 121 of those yards came from Rodgers against Syracuse and 87 of those came on one catch.

Right now, Rodgers, Overton and Powell are on pace to combine for just 41 receptions for 422 yards and 7 touchdowns. Renfrow, alone, averaged 46.5 catches for 533.3 yards and 3.8 touchdowns in his four seasons as the starter. It’s obvious, through the first five games of the 2019 season, the Tigers are missing the old No. 13.

“You just can’t look at stats and make assumptions and things like that,” Swinney said. “It is a whole lot deeper game than that and every game is a season of its own. Every game is a life of its own. In (the North Carolina) game the throws weren’t over the middle, except when we ran by them because the safeties were down low, and we did run by them.

Swinney said the Tigers had the right plays called against UNC in the short-to-intermediate passing game, but they did not execute very well.

“We could not get into rhythm. We couldn’t make layups that were there,” he said. “Whether we missed a throw, we had a penalty, we fell down. It was just kind of comedy of errors to be honest with you.”