Clemson safety Nolan Turner knows he has come a long way in the four years that he has been a part of Dabo Swinney’s program.

The head coach always tells his players to enjoy the journey, and it has been a long journey for Turner, a redshirt junior who had to bide his time before becoming what he is now – a key cog on the Tigers’ stout defense.

“It’s cool to look back and see how far I’ve come since I got here, and I still have another year to go,” Turner said. “It’s been a cool journey.”

Turner redshirted the 2016 season before seeing limited snaps in 2017 and then stepping into a larger role as a redshirt sophomore last season.

The native of Vestavia Hills, Alabama, played in all 15 games and made a name for himself in the College Football Playoff, recording his first career interception in the Cotton Bowl vs. No. 3 Notre Dame and then logging four tackles in the National Championship game against Alabama, his father’s alma mater.

After the first five games of the 2019 season, Turner is sixth on the team with 24 tackles, a total that includes two tackles for loss, and he has also broken up four passes.

Turner has performed his best in big moments for the Tigers thus far this season, including against then-No. 12 Texas A&M on Sept. 7, when he tallied four tackles (one for loss), two pass breakups and a forced fumble in the 24-10 victory at Death Valley. 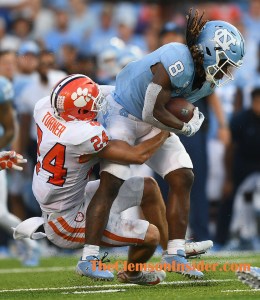 This past Saturday at North Carolina, Turner stepped up after starting free safety Tanner Muse left the game with an injury, posting six tackles (one for loss) and contributing to the game-winning stop on a two-point conversion attempt in the Tigers’ 21-20 win in Chapel Hill.

“It’s really fun to get out there and actually play and just be a big part of the defense,” he said.

Although Turner is not technically a starter, he has seen extensive action in each game this season, and Swinney has said in the past that he considers Turner a starter.

After waiting his turn in his first couple of years at Clemson and working hard for his opportunities, Turner has taken advantage of them, shown what he can do and emerged as a dependable member of the Tigers’ secondary.

“Just a lot of work — day after day, just continuing to grind and not letting outside forces or other things bring you down,” Turner said of how he has earned a prominent role on Brent Venables’ defense. “Just continuing to work in the weight room, especially film work with Coach V, learning the defense and just getting the reps at practice and stuff. Year after year, you start getting more confidence, getting more comfortable out there and slowly progressing.”

Turner’s father, Kevin, played football with Swinney at Alabama and went on to an eight-year career in the NFL with the New England Patriots and Philadelphia Eagles.

Playing in the league like his dad is something Nolan aspires to do when his Clemson career is over.

“As a college player, as a competitor, you always want to see if you can make the next step, the next jump,” he said. “So, when that time comes, that’s definitely something I’m interested in.”