Khurtiss Perry is considered one of the top defensive line prospects in the class of 2022 and already has offers from some of the nation’s best programs to show for it.

Clemson typically does not offer underclassmen, though the Tigers are showing significant early interest in Perry, a 6-foot-3, 260-pound sophomore from Park Crossing High School in Montgomery, Alabama.

Perry had planned to visit Clemson for the Texas A&M game on Sept. 7 but couldn’t make it due to a death in his family. So, he is looking to reschedule a trip to Tigertown.

“I plan on coming down real soon. Don’t know which game yet,” he told TCI. “I had a family member pass away on that Friday hours before my game so I just didn’t go to South Carolina on that Saturday because [there] was too much going on.” 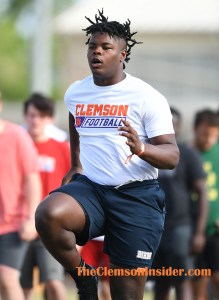 Perry visited Clemson for the first time this past June to participate in the Dabo Swinney Camp. While on campus, he was able to meet Swinney and spend time with defensive tackles coach Todd Bates.

The coaches have told Perry that they like him a lot – both as a football player and as a person.

“They say I’m very respectful and I’m a great player with a fast get off,” he said.

Perry is certainly interested in Clemson as well and hopes to see the Tigers eventually join his offer list, which includes schools such as Auburn, Georgia, LSU, Penn State, Tennessee and Virginia Tech.

“It [would] be a great moment for me knowing the number one team in the country thinks I have a chance to play on their team,” Perry said of a potential Clemson offer.

Auburn is the only school that Perry has visited so far this season. Along with Clemson, Perry said he wants to visit Alabama, Ohio State and possibly Auburn again.

Perry is ranked as the No. 2 strong-side defensive end and No. 17 overall prospect in the early 247Sports rankings for the 2022 class.

Based on history, Clemson’s ACC opener agaisnt the University of Miami was going to come down to the wire. And, it did. Though, it wasn’t the result that the Tigers had hoped for. Miami went on a 19-3 lead to (…)