Clemson still No. 1 for 5-star

Clemson still No. 1 for 5-star

Clemson remains the team to beat for an elite prospect from South Florida in the 2021 class.

Five-star cornerback Corey Collier of Miami Palmetto High School told The Clemson Insider that the Tigers are still his leader after extending an offer to him over the summer.

“Still number 1,” he said when asked where Clemson stands in his recruitment. 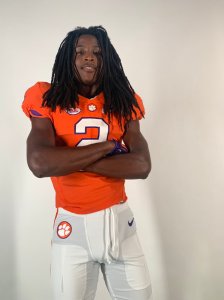 Cornerbacks coach Mike Reed has been in contact with Collier, who is ranked by Rivals as a five-star prospect, the No. 1 corner and No. 9 overall prospect in the 2021 class.

“Coach Reed is really just showing me love and saying what it is (like) to be a Tiger,” Collier said.

Collier (6-2, 175) picked up an offer from Clemson after making an unofficial visit to the school in early June. He told TCI that he “most definitely” wants to return to campus.

Along with the Tigers, his list of 30-plus offers includes schools such as Georgia, LSU, Auburn, Notre Dame, Michigan, Miami, Florida State and Florida.

When is Collier looking to render his commitment decision?

“Probably next year,” he said.