One quarterback prospect in the 2021 class that continues to garner significant interest from Clemson is Colten Gauthier of Dacula (Ga.) Hebron Christian Academy.

The 6-foot-3, 205-pound junior has been communicating with quarterbacks coach Brandon Streeter on a regular basis.

“I speak to Coach Streeter every week either through text or phone call,” Gauthier told The Clemson Insider. “I am still one of the top QBs in the 2021 class they are evaluating.”

According to Gauthier, Streeter plans to attend his home game against Riverside Military Academy (Gainesville, Ga.) on Oct. 25. 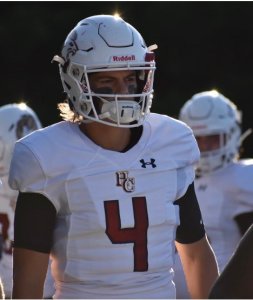 “It means a lot for him to come watch me play,” Gauthier said. “Obviously everyone knows Clemson and other colleges don’t just go to anyone’s game. It is a privilege and an honor to have them come watch me play.”

Gauthier would be thrilled if the Tigers decide to join his list of scholarship offers, which includes South Carolina, UCF, Miami, Georgia Tech, Syracuse, Virginia Tech, Kentucky, Vanderbilt, West Virginia and others.

As of now, Gauthier doesn’t have a set commitment date but would like to wrap things up sooner than later.

“I hopefully want to make my decision soon,” he said. “But right now I am enjoying the process and focusing on my season. I will know more once my season is over.”

Gauthier visited Clemson for the Texas A&M game on Sept. 7 and has also visited South Carolina this season. Gauthier said he expects the Gamecocks to be in attendance for his home game vs. Towns County (Hiawassee, Ga.) on Friday night.

In five games this season, Gauthier has thrown for 983 yards and seven touchdowns with four interceptions while rushing for 115 yards and three more scores. As a sophomore in 2018, he passed for more than 2,000 yards and 19 touchdowns.