Clemson head coach Dabo Swinney reviewed the win over Florida State in his Sunday teleconference and gave updates on the latest injuries.

A transcript of Swinney’s teleconference follows:

“As I said last night I am really proud of our team on the outstanding win, just an awesome job by our guys and out staff.  It was fun to see us play like I know we are capable of and get a big win.  Clemson, Florida State as been an awesome game to be a part of for a long time.

I liked our confidence.  I liked our focus, the effort, the physicality and the mindset that we played with.  It was a really good win but having said that you get a 45-14 win and you think it is all good but there is just so much that we have to improve on.  I think we have a great opportunity to improve our team because there is a lot of stuff that we have to get cleaned up on both sides of the ball.  A lot of opportunity to teach on that tape but a really good win.

Offensively we set the tone early and really threw and caught the ball well although I felt like there was probably at least three other balls that we should have come down.  But our physicality on the offensive line.  I thought Jackson played a great game.  Travis Etienne, his presence, his physicality, the yards after contact.  He really did a good job for us.  So just a really good day.  We were efficient with our plays and the rhythm of the offense and the things that we wanted to do.  We weren’t great on third down.  Later in the game with some of our backup guys.  I think that is the biggest thing on both sides is our depth.  We need to really improve some of these guys that we know we will need at some point.

I am proud of our defense and how they played.  The physicality and four turnovers.  Obviously a score and three sacks.  So many good things on defense.  A lot of things we can improve to.  Just recognizing some of the formation stuff, just details so we have to stay hungry to improve as a team.

Again super proud of our team and we need another great week of practice this week.  We are back on the road for another division game Louisville who just beat a ranked division team at their place.  They will have a lot of confidence.  For us it is back to work tomorrow trying to correct some of the mistakes and really take the opportunity to teach some of these guys and continue to have the edge that it takes. ”

“Tee Higgins has a very mild strain of his hamstring.  The same thing with Jake Venables.  Frank (Ladson) kind of rolled his ankle so all of those guys are in treatment and all of that and hopefully will be ready to go. Other than that we came through the game pretty good.”

Question:  What was it like seeing Derion Kendrick have that moment yesterday where he was able to get the interception and return it for a touchdown?

Swinney:  “Well he has worked really hard to get better and he has really been good.  From the first day he moved over there you could just tell he had the right mindset and is a natural.  We knew those guys were going to challenge us and we were going to be on an island a little bit at corner.  It was good to see him play well.  I thought he played really well.  But that play in particular was a huge play.  That is the type of play, especially when you are a young player that can really create confidence and hopefully good momentum going into the rest of the season for him.”

Question:  Can you talk about how Will Brown has helped the team and as you are now at an elite status as a team how much do guys that only play 40 snaps and are on the scout team contribute to the team?

Swinney: “Well everybody is important on our team.  Our walk-ons are, we have had some, well Hunter Renfrow was a walk-on so he caught the national championship catch.  Phillip Price was a walk-on.  We have had a lot of guys that are really good football players, that could be playing at a lot of places, but they come in here and value what our program offers and work their tails off and want to compete at the highest level and Will Brown is definitely one of those guys.  He is a good football player.  He is a committed guy.  He is an excellent leader and just a high character.  He takes advantage of all of the resources around here.  He is one of the leaders in our Paw Journey program and is a very respected guy.  He works his tail off every single day.  He hasn’t gotten as much opportunity right now but he is a guy that we trust and hopefully over the next couple of years he will get more opportunities.”

Question:  As your recruiting has improved is it harder for a Hunter Renfrow to come along and be the star that he has become?

Swinney:  “No, it is hard now.  It was hard five years ago.  We have been good for a long time.  It is really hard to walk-on anywhere at this level because everybody has good players so it is just not an easy task.  Look at what Luke Price has done for us.  We have snappers that have walked on and we have a lot of guys but most of the guys come in, they work their tails off and they don’t get an opportunity to play but they are part of the program.  But we have a bunch of guys that are good enough to play.  We try to get them in there when we can but it is not an easy task.  That is for sure.”

Question:  You guys really held down Cam Akers yesterday.  What was the key to that?

Swinney:  “I think it was our mindset just taking the field.  We had a physical mindset and we played with great effort.  We did a lot of the little things better than we did the previous week.  They did pop a 40 something yard run there at the end that kind of skewed that 100 on our young guys that were in there.  But as far as our first group I just thought that there focus, their attention to detail, the effort that they played with and just the physicality.  That was the mindset these guys had coming in and you better have that against a back like Akers so I was just super proud of them.”

Question:  How much did you notice on film about how well Trevor was going through his progressions?

Swinney:  “Oh he played great.  He really did.  He really played well outside of that bad interception.  That was a bad play.  He played a good game and a lot of times it is not going through your progressions as much as it is post snap recognition and knowing where to go with the ball based on what you see.  I thought he did a nice job of processing everything.  He made great decisions in our run game and ran the ball really, really well.  I was super proud of him.  He probably should have had six touchdowns to be honest with you.  I thought there were three other balls that he didn’t make but that we are going to need to make.  It is not that big of a deal in a 45-14 game but there are some plays in there that we are going to need to make.  I was proud of his ball placement.  I thought he had one bad throw.  I believe it was to Ngata.  It was not a bad throw it just wasn’t catchable.  I just thought he played outstanding, really locked in and focused.”

Question:  I didn’t notice Mario Goodrich out there.  Is there any kind of update on him?

Swinney:  “We just didn’t play him.  We sat him.  He is in trouble with me.  So that is why you didn’t notice him.  He will be back this week but it was just my decision not to play him.” 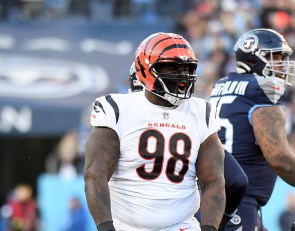 What They Are Saying: Reader dominates for Bengals 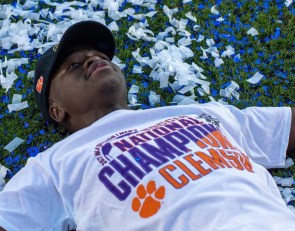