Collins, an elite wideout in the 2021 class, traveled to campus with his parents. They took an overnight flight from Los Angeles to Atlanta following St. John Bosco’s game Friday night and didn’t make it to Death Valley until midway through the first quarter.

After the Tigers’ 45-14 win over the Seminoles, Collins spent time with head coach Dabo Swinney and was given a tour of the football facility by receivers coach Jeff Scott. Collins and his parents headed back home Sunday morning.

Saturday was a long day for Collins, but he is certainly glad he made the visit.

Collins (6-4, 195) loved what he saw from Justyn Ross, who scored a pair of touchdowns vs. FSU, and the rest of Clemson’s receiving corps during Saturday’s game.

“They looked great,” he said, “just proving why they continue to produce great receivers into the league and big bodies like myself, just using them as best as they can.”

The atmosphere at Death Valley, created by the 80,000-plus fans in attendance, impressed Collins as well.

“It was pretty crazy,” he said. “I’d say one of the top fan bases in the nation.” 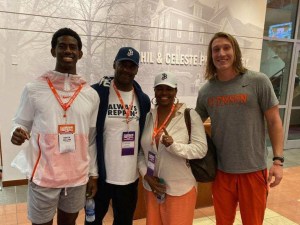 Collins had an opportunity to talk with Trevor Lawrence in the locker room after the game as the Tigers celebrated their victory.

“He’s a great QB to have and just a great person off the field as well,” Collins said. “Most guys of that status are a little above themselves, but he’s just as down to earth as most people.”

As for Swinney and Scott, they conveyed a clear message during their conversations with Collins.

“They told me how much of a fit I’d be in the program and how much they really see me there continuing my football career and just becoming a better person on and off the field at Clemson,” he said. “They see me doing really well there.”

Like Collins, his parents had a great experience at Clemson – especially his mother.

“My parents loved it,” he said. “I think my mom enjoyed it a little bit more than my dad did. She really enjoyed talking to Coach Swinney and seeing what his personality is like.”

Clemson and Ohio State are considered the frontrunners for Collins, who also holds offers from Southern Cal, Notre Dame, Alabama, Florida, Georgia, LSU and Texas among others. Collins went to Ohio State for its game vs. Michigan State on Oct. 5 and said that he does not have any more visits lined up right now.

Collins told TCI that Clemson was “extremely high” on his list entering Saturday’s visit, and says the Tigers only helped their chances with him over the weekend.

“It just put them a little bit higher,” he said.

Collins is ranked as the No. 2 wide receiver in the 2021 class according to the 247Sports Composite, which ranks him as the No. 30 overall prospect in the class regardless of position.

Through the first six games of his junior season, Collins tallied 20 receptions for 536 yards and eight touchdowns.