McFadden: Coming to Clemson ‘was the best decision I’ve ever made’

McFadden: Coming to Clemson ‘was the best decision I’ve ever made’

Looking back on it, Jordan McFadden couldn’t be happier about the decision he made two years ago during the recruiting process.

On Dec. 9, 2017, the offensive lineman from Spartanburg, S.C., publicly flipped his commitment from Virginia Tech to Clemson.

Now a redshirt freshman at the school, McFadden is really glad he chose to be a Tiger.

“I was just talking to some of my teammates about it, and I feel like coming here was the best decision I’ve ever made,” McFadden said this week. “Just family … I’ve gotten a lot closer with my teammates and everything. I just feel like this was the place for me to come.”

A Shrine Bowl selection and state lineman of the year by The State newspaper coming out of Dorman High School, McFadden enrolled at Clemson in the summer of 2018 and entered the 2019 season following a redshirt campaign last year in which he played 17 snaps over three games.

McFadden feels he has developed a lot since he joined the program, particularly in terms of his knowledge of the playbook.

“I feel like when I first came in, I was struggling a little bit learning the playbook,” he said. “But I feel like now I have a pretty good grasp of it, and everything just feels like it comes a lot easier and I can play faster and I’m more confident while playing.” 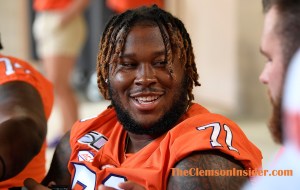 McFadden is second on Clemson’s depth chart at left tackle behind sophomore Jackson Carman and has played in five of the Tigers’ first six games this season, including Saturday’s game against Florida State when he logged 41 snaps while helping the Tigers rack up 552 total yards of offense.

McFadden credits guys like Carman, senior offensive tackle Tremayne Anchrum and senior guard John Simpson for helping him grow as a player early in his career.

“I’ve learned a lot from those guys,” he said. “Me and Jackson are pretty close, we talk a lot. The things that he’s learned last year from Mitch, he’s told me different things to help me with my game. And I’ve learned a lot from everybody up front, especially John and Tremayne. Coming in, Tremayne kind of took me under his wing and helped me. So, just learning from Tremayne and all the experience he has, it’s been really good.”