Clemson hosted Burton earlier this season for the Texas A&M game on Sept. 7, when the Tigers beat the Aggies 24-10 at Death Valley.

“Clemson was one of the first visits I went to, so I didn’t have a lot to compare it to,” Burton said. “But now, going to a lot of other places for games, it was definitely one of the best environments I’ve been to. The fans are insane, and it wasn’t even a night game. I think it was a 3:30 game, and it was supposed to be a close game and they kind of throttled them there to the end. So, it was a really cool experience for sure.”

Burton has also attended games at Penn State, Oregon and Kentucky so far this season, though his experience at Clemson was one of a kind.

“I’d say just the atmosphere as a whole,” he said of what stood out about it. “I know that’s probably what a lot of people say, but really, at Clemson it’s different with the hill run and all that. Getting to see that up close in person was awesome.”

Burton made the trip to Tigertown with his Frederick Douglass teammate, best friend and class of 2020 Clemson O-line commitment Walker Parks.

Playing with Parks at the next level in a Tigers uniform is a thought that Burton has certainly entertained.

“It’s definitely a thought because we’ve been playing together since we were probably 6,” he said. “So, just being around that and being around him all the time, he talks about it. But there’s no pressure from him to go there. So, it’s a thought, but it’s not a decision-maker for me.” 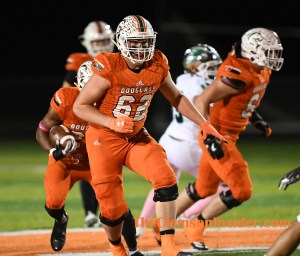 Burton earned an offer from Clemson after working out with offensive line coach Robbie Caldwell at the Dabo Swinney Camp in June, and the two have built a good relationship.

“Coach Caldwell’s a great dude,” Burton said. “He’s known one of my coaches for a really long time, so they’re friends. Walker obviously, he’s known Walker, and I know him I guess really well. You can tell he loves the game of football, and he’s just a great coach all around.”

“He’s a great dude,” Burton said. “He’s the same person on TV as in person, and a lot of times, I feel like people don’t think that’s the case – like this guy can’t be this Christian, family guy. But he’s exactly the same in person. I have no bad words about him.”

Burton plans to visit Ohio State, Alabama and LSU before the season ends. He is shooting to make his commitment prior to his senior year in 2020.

“Hopefully I get it done by then,” he said. “If not, just I guess signing day.”

Clemson remains firmly in contention for Burton, who intends to take his official visits before rendering his college choice.

“Right now, I’m just trying to get those five officials planned out,” he said. “I have two officially set up – Oregon and Penn State – those are the only two I have set up. But Clemson’s definitely one of the schools that is definitely in the conversation for me right now as I finish everything up.”