Clemson ‘checked all the boxes’ for Parks family

Clemson ‘checked all the boxes’ for Parks family

After seeing her son get emotional when he received an offer from Clemson at the Dabo Swinney Camp in June of 2018, Walker Parks’ mother knew that he would likely end up committing to the Tigers.

“I think he fell in love with it there, and he had some tears when they offered him,” Beth Parks told The Clemson Insider recently. “But after we visited other places, as a mom, I knew that he would probably go there – from his reaction and how he felt comfortable and everything.”

Beth was right, as Walker gave his verbal commitment to Dabo Swinney’s program a few months later while on campus for the NC State game last October.

Clemson checked off everything that Walker, Beth and his father, former Kentucky offensive lineman David Parks, were looking for in a school as they went through the recruiting process.

“Everywhere we went, we had a check list,” David said. “It was on the town, it was on the school, it was on the academics, it was on the athletics, the football team, the coaching staff, all that stuff, and Clemson checked all the boxes real quick. So, it made it (the decision) kind of easy.”

The way that Walker went about getting an offer from Clemson was a big deal for him, and his relationship with offensive line coach Robbie Caldwell also played an important role in his decision.

“I think one of the biggest things for him was how he got the offer at camp,” David said. “It was something he earned. He went there and they weren’t recruiting or talking to him beforehand, so when he went there and actually earned it, it meant something. It meant a lot to him.

“So, he and Caldwell hit it off really big. He appreciates Coach Caldwell, the way he coaches on the field, his technique, his terminology, his personality and everything that goes with it. So, that was a huge step in the right direction. Then of course we got to know everybody and got to know the facilities and the campus and the program and everything, and it just all clicked.” 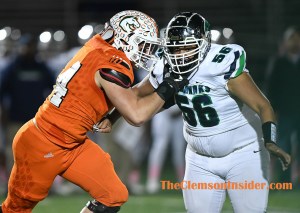 Walker and his family felt more comfortable at Clemson than any other school he visited during the process. The Tigers welcomed them with open arms and made them feel like part of the Clemson Family from the start.

“When I talk to people about it and I tell them about Dabo and his staff, in particular Coach Caldwell and Thad Turnipseed (director of recruiting and external affairs) and those guys, I think one of the first things we noticed is that they welcomed us in almost immediately, where it’s just a feeling like ‘I belong here,’” David said.

“It was very apparent early on when they liked Walker and offered Walker obviously, and then the more times we went there, we just felt like we fit in. So, by the time Walker made his decision, we kind of knew. We never got that feeling anywhere else. So, it was pretty easy.”

David — whose final game at Kentucky was the 14-13 loss to Clemson in the 1993 Peach Bowl — says the Tigers are getting an offensive lineman in Parks who loves the position and the game of football in general.

“He’s not a kid that wasn’t good enough to be a skill kid so they put him on the line,” David said. “He’s always played line — he’s always loved it. So, he’s real passionate about it from that standpoint.”

A tough, physical, hard-nosed and aggressive player on the field, Walker is a different person off the field and has the type of character that the Tigers look for in their recruits.

“Walker is one of the most humble, bighearted… He loves everybody, everybody loves him,” Beth said. “He’s a good kid. I mean I know I’m his mom and I’m partial, but he really is – I have been blessed with two great boys, and he’s a super… He’s smart, athletic, a great kid.”

While Beth will be sad to see Walker leave the nest when he enrolls at Clemson this coming summer, she and David know their son will be very well taken care of in Tigertown.

“I’m super excited for him to continue his dream,” Beth said. “It’s going to be hard, not going to lie, because he’s the baby and it’s a little journey. But I told him, I said, ‘We can drive. We’ll be at all the games, and if you need us to come down, we’ll be there.’

“He’s in good hands and it’s exciting for us as parents.”