Parks reflects on his journey to becoming a Clemson commit

Parks reflects on his journey to becoming a Clemson commit

Almost one year ago to the day, Walker Parks made the decision to be a Clemson Tiger. On Oct. 20, 2018, the four-star offensive lineman from Frederick Douglass High School in Lexington, Kentucky, gave his verbal commitment to Dabo Swinney’s program and has been All In ever since.

The Clemson Insider visited Frederick Douglass last Friday to watch Parks play as part of our Tour of Champions and caught up with the future Tiger there.

Twelve months after jumping on board with the Tigers, Parks (6-5, 275) reflected on the journey that led him to become a Clemson commit.

“It actually started about a year or two before I even stepped foot on campus at Clemson, before I went to the camp and everything,” he said. “FBU Top Gun (Football University’s Top Gun Showcase) was in South Carolina, and I told my dad, ‘I want to go over to Clemson.’

“So, we did. We drove over there, we ate at Esso and then we went over to the facility and we walked in. I was like it’s a long shot, but I’m going to do it. So we went up to the front desk and we were like, ‘Is Coach Caldwell here?’ And she was like, ‘Do you have a meeting?’ And I was like, ‘No, we just want to talk to him for a second.’ So she was like, ‘Sorry, we can’t let you do that.’”

So, Parks and his father – former Kentucky offensive lineman David Parks – stepped back outside the football facility and toured the campus and checked out Death Valley themselves.

“We went over to the field and the gate was unlocked, so we actually went out onto the field, walked around and walked around campus and everything,” Parks said. “I kind of knew right there, I was like, I want to play football here. So I told my dad, ‘I want to come to camp here next year.’” 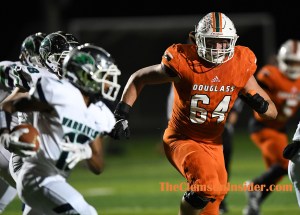 Parks participated in the Dabo Swinney Camp in June 2018, the summer before his junior year. In the months leading up to the camp, he worked out and prepared himself physically with one goal in mind – to impress Clemson’s coaching staff.

“I trained my butt off for an entire year,” he said. “That was my motivation every day when I woke up – I was like I’m going to camp there, I have to be ready for that. Because I knew that was it, that was my opportunity.”

Parks took advantage of his opportunity, earning the coveted offer from Clemson at the conclusion of a full three-day camp session.

“I wanted to end it right there. I wanted to commit because I knew it’s where I wanted to be,” he said. “But my dad talked me into looking around a little bit longer. So I took a couple more visits, went around here and there and then after about two or three more visits, I knew in my heart, I want to play football for Clemson.”

So, Parks made an unofficial visit to Clemson for the NC State game last season and informed Swinney and offensive line coach Robbie Caldwell of his commitment while on campus.

“From that day, I’ve never looked back,” said Parks, who chose Clemson over offers from Kentucky, Notre Dame, Auburn, Tennessee, Virginia Tech and West Virginia, among other major programs.

“I’ve never thought maybe I shouldn’t have done that, maybe I should have waited… It’s fully in my heart that that’s where I belong.”