Swinney made Tigerama a part of the football culture at Clemson

Swinney made Tigerama a part of the football culture at Clemson

The Friday afternoon of a home football weekend in Clemson, the football team will have its team and unit meetings, will eat the team meal and then head to Anderson where it checks into the team hotel before catching a movie.

The Tigers do the same routine six times a year, except for one game every year … homecoming.

When Dabo Swinney became the head coach at Clemson back in 2008, he changed a lot of things up to bring the Clemson Football Program closer to the fans.

Swinney started by introducing Tiger Walk as a new game day tradition. The next week he started the team’s community service project on the open date, which the Tigers also do during bowl prep, spring practice and during fall camp. He also started, as a team, visiting elementary schools on their way out of town on road and bowl game trips.

The Tigers also hand out pizzas to the students working on the homecoming floats at Bowman Field the Wednesday night before the game.

“I felt like our guys were not engaged on what was going on, on campus and the pageantry of Clemson,” Swinney said. “I just think it is important. It is college, you know?” 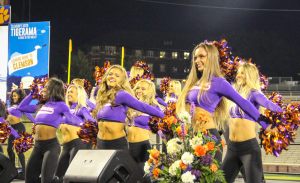 Tigerama is Clemson University’s Homecoming pep rally, which first took place in 1957. It was the brainchild of former Clemson News and Alumni Relations Director, Joe Sherman.  Since then, Tigerama has taken place every year, mostly at Death Valley and is known as the second-largest pep rally in the country as more than 40,000 Clemson fans attend.

“I didn’t even know what Tigerama was. I had no idea,” Swinney recalled. “I had been here six years (as an assistant coach) and I did not have a clue.”

Like he did with Tiger Walk and the first community service project, Swinney changed up his team’s routine for homecoming. He went to the organizers of Tigerama and asked if the team could participate somehow in the event.

Before 2008, no Clemson football team had participated in Tigerama.

“You know what, I was like, ‘We are going to participate and be a part of it like everybody else.’ It has been a lot of fun,” Swinney said. “We have done it every year. It is kind of like a pep rally and something for these guys to really just be a part of it with the rest of the community here.”

The Tigers just don’t show up, they participate, as well. In years past, former players like C.J. Spiller and Jacoby Ford have danced for the crowd. Spiller, of course, is known better for his ability to run with the football than his dancing skills.

“The other students and the fans come in early. It is a fun time. We take just a few minutes to disengage and connect with our fans and loosen up a little bit,” Swinney said. “Then we go to a movie. It is just become a part of our Homecoming routine around here.”

But it is not an easy thing to pull off, especially with 120 student-athletes. Clemson still has its team meetings and meal at the Allen Reeves Football Complex, but instead of heading to Anderson, they’ll head over to Tigerama at Death Valley, do their skit, load the buses up, go to the Friday-night movie, then head over to the hotel.

“It is our Homecoming routine,” Swinney said. “It is just a part of what we do. Just like our away game routine is pretty set, but one of these games we go to the elementary school. It is one of those little things we do year in and year out and the guys know.

—above photo by Jessica Jones, courtesy of Clemson Athletic Communications