Gordon told The Clemson Insider that he had a great experience at Clemson.

“I loved it,” he said. “It’s a very special place. There is no doubt why they are one of the best teams in the country.”

Last weekend, Gordon traveled to Columbia for South Carolina’s game vs. Florida. How did that visit compare with his visit to Clemson?

“It doesn’t compare at all,” he said. “Clemson is so much more of an elite school. Everything about Clemson beats out SC.” 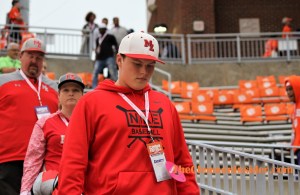 Gordon singled out seeing the game environment in Death Valley as the highlight of Saturday’s visit.

“The atmosphere in that stadium was nothing like anywhere I have been before,” he said. “It was amazing.”

Gordon had a chance to chat with offensive line coach Robbie Caldwell and defensive tackles coach Todd Bates while he was on campus.

“They were happy I could make it up there,” Gordon said. “It was my first time on campus and actually meeting the coaches.”

“I currently don’t have any offers but a lot of schools are showing interest,” he said. “Tennessee, SC, Clemson, Ole Miss, Auburn, GT and Colorado are the top ones that are really talking to my coaches about me.”

Gordon has also visited Georgia Tech and Tennessee this season in addition to Clemson and South Carolina. He has upcoming visits planned to Ole Miss and Auburn and plans to return to Georgia Tech as well.