Palmetto State prospect Chase Sweigart grew up a Clemson fan and has participated in the Dabo Swinney Camp each summer since he was a second-grader.

This past weekend, the big class of 2022 offensive lineman from Chapin (S.C.) High School returned to campus on an unofficial visit for the Tigers’ game against Boston College.

“I enjoyed it a lot and I had a great time,” Sweigart said.

Sweigart – a 6-foot-6, 280-pound sophomore – said the highlight of his experience came following Clemson’s 59-7 win over the Eagles.

“Going into the locker room after the game and watching everyone dance after a win,” he said. “Especially (offensive line) coach (Robbie) Caldwell.

Sweigart had the opportunity to spend some time with Caldwell individually.

“I’m a sophomore and coach laughs at that because he thinks I’m a junior,” Sweigart said. 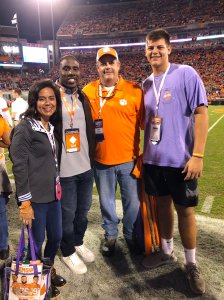 Sweigart, who also had a chance to meet former Clemson great C.J. Spiller, made the trip to campus with his parents and two sisters as well as a couple of his Chapin teammates.

“They love it and always have a great time with Coach Caldwell,” Sweigart said of his mom and dad.

Sweigart is having a solid sophomore season at Chapin and continues to improve.

“I’m grading consistently well, having fun going against upperclassmen, and game experience is paying off,” he said. “Getting stronger!”

Sweigart has also visited NC State and Appalachian State this season well. He does not currently have any college visits scheduled.

I had another great visit at Clemson for the game against BC. Glad I got a chance to talk with @OLCoachCaldwell and watch him dance in the locker room. pic.twitter.com/pSlVODYvsK