Clemson safety Tanner Muse joked this week that the defensive linemen on the team were disgruntled earlier this season when the Tigers played mostly three-man fronts, but are now in a better mood as they have been lining up with four linemen more often of late.

“We were in a three-man front most of the year, and it kind of got them all tore up a little bit,” Muse said. “So, just having them grow into and having that four-man front, they’re really starting to enjoy it and have their little fun now.”

Of course, Clemson’s defensive line entered the season as the biggest question mark on that side of the ball for the Tigers after they lost all four starters up front to the NFL. Everyone on the outside wondered how or if they would be able to replace the production of Clelin Ferrell, Christian Wilkins, Dexter Lawrence and Austin Bryant.

Eight games into the season, the D-line has more than held its own as several different contributors have stepped up for Clemson’s defense, which is actually ahead of the 2018 team’s season averages in categories such as scoring defense (11.4 points per game allowed), total defense (246.1 yards per game allowed) and sacks per game (3.75).

Seven different defensive linemen have combined to tally 13 of the Tigers’ 30 sacks on the season, while the defensive line as a whole has accounted for 28.5 of their 66 tackles for loss – a total that is tied for seventh-most in the country. 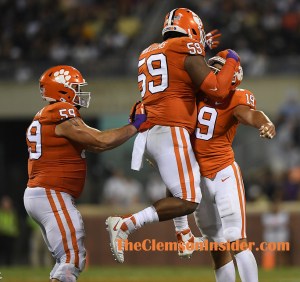 The performance of the D-line has helped take stress off of Muse and the secondary and made their jobs less difficult.

“Just seeing them guys rise to the occasion has been awesome,” he said, “and it’s made it a lot easier on the back end.”

“It was a young group, and Nyles and Jordan (Williams) in the interior, they did a great job of getting them guys ready,” he said. “Tyler Davis is just looking incredible right now, and our D-ends are doing a great job, especially with XT (Xavier Thomas) that went down (concussion). A lot of production was lost from him not being there in the last couple weeks.”

“They’re going to do what they’re told like everybody else because he’s just going to put us in the best position,” Muse said. “But I think they have a little bit more fun with that four-man front.”