Among the prospects that Clemson hosted for Saturday’s game against Wofford was Woodstock (Ga.) quarterback Robbie Roper.

It was the class of 2022 recruit’s first unofficial visit to Clemson.

As much as he liked seeing what Clemson has to offer from a facilities standpoint, it was not the best part of the visit for the talented Peach State signal-caller.

“My highlight was watching Trevor Lawrence play,” Roper said. “He grew up 30 minutes away from me.”

Roper had a good conversation with Clemson senior offensive assistant Kyle Richard while on campus.

The Tigers are among several FBS programs showing early interest in Roper.

“It is very early in the recruiting process,” he said. “I have had invites and visits to Georgia Tech, NC State, Liberty, Clemson, Kansas State, Georgia State and Tennessee. I plan on visiting Auburn, UGA and Alabama in the next few weeks.”

The 6-foot-3, 210-pound sophomore describes himself as a quarterback that can use both his arm and his legs to attack an opposing defense.

“I have five all-star invites this year,” he said. “I would say I am a dual-threat QB. I of course throw the ball but love to run for a first down almost as much.” 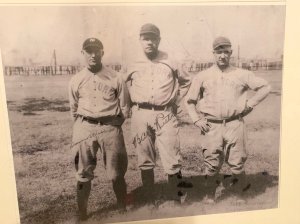 Roper comes from a multi-generational athletic family and hopes to continue the sports legacy at a big-time college football program.

“My great grandfather Sam Vick played on the Yankees with Babe Ruth,” said Roper, who also plays basketball for Woodstock High School. “My mother played college basketball, and my sister Breanna Roper plays softball for Georgia Tech. She hit two grand slams as a freshman and led the entire NCAA in hits for most of the season last year.

“I have already been called a Power Five prospect by a Sports Illustrated analyst. That would be amazing to play for a Power Five school.”