“It’s been going great,” Tucker said of his senior campaign. “First playoff game is next Friday in Memphis (vs. Memphis University School). Looking forward to it.”

Meanwhile, the team that Tucker will suit up for next year is trying to earn a spot in the College Football Playoff for the fourth consecutive season.

“I’m not the type of person to rant about it,” Tucker said of the ranking. “I know my boys down there will do business and be back at the top.”

While many in the media have been critical of the Tigers, especially because of their close win at North Carolina and their schedule, Tucker knows they have been taking care of business in dominant fashion.

“It’s going great,” he said of Clemson’s season. “Undefeated and 24 straight (wins) in a row. The people are doubting us, though. But we just play our game and keep moving.” 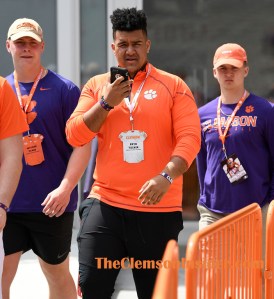 It won’t be long before Tucker joins the Clemson football program, as he is set to enroll early at the school in January.

“It’s definitely exciting, but also kind of sad because my family won’t be seeing me every day like usual,” he said. “But they believe this is the best move for me and they will always follow my dreams.”

Tucker, who committed to the Tigers last March, will make his official visit to Clemson from Dec. 13-15 prior to the early signing period that begins Dec. 18.

“Very excited,” he said of the upcoming official. “It’s always great to be back in Tiger Town.”

Tucker — the No. 4 offensive guard and a top-150 overall prospect in the 2020 class per ESPN – was presented with his Under Armour All-America Game jersey on Thursday. The UA All-America game will take place Thursday, Jan. 2 at Camping World Stadium in Orlando, Florida.

“It was unreal getting the jersey,” Tucker said. “All praise to God for the moment.”