Clemson got a career-high four touchdown passes from Trevor Lawrence, while Tee Higgins caught three of them as No. 3 Clemson continued its assault on the ACC with a 52-3 victory over Wake Forest Saturday at Memorial Stadium.

The win marked the second straight year Clemson posted a perfect record against ACC competition, a first for the program since it did the same for three straight years from 1981-’83. It was also the Tigers’ 22nd straight win at Death Valley, a new school record.

It also marked the first time since 1981-’83 that Clemson posted three straight undefeated seasons at home. Clemson’s seniors, who were honored before the game, finished their Clemson career with a 27-1 record at home, tying the 2017 and 2018 seniors.

As for the game, Lawrence finished the afternoon 21-of-27 for 272 yards, while throwing touchdown passes to Higgins of 14, 14 and 30 yards and 10 yards to Frank Ladson.

After starting the Louisville game rough—3-for-7 for 9 yards, two interceptions and no touchdowns—Lawrence has not thrown an interception in the last 19 quarters and is completing 77.4 percent of his passes.

Higgins’ three touchdowns were also a career-high for the junior who finished the game with 4 catches for 64 yards.

Running back Travis Etienne ran for 121 yards on 16 carries. It was Etienne’s sixth straight 100-yard game, a Clemson record. Etienne had a 14-yard touchdown run in the second quarter. That was the 51 rushing touchdown of his career, moving him into second place in ACC history.

While the offense was doing its thing, the defense was absolutely marvelous in limiting Wake Forest to 105 total yards. It is the first time the Demon Deacons have been held under 200 yards since the 2016 season when the Tigers held them to 197 yards.

Clemson finished the game with 516 yards.

The Tigers are off next week and will visit rival South Carolina in Columbia on Nov. 30 to close the regular season. 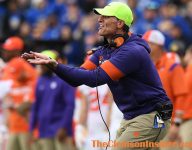