One of Clemson’s top targets in the 2021 class is five-star prospect Will Shipley, the nation’s top-ranked all-purpose back from Weddington High School in Matthews, N.C.

The Clemson Insider caught up with Shipley this week about a variety of topics heading into his team’s 3AA state championship game tomorrow night against Lee County (Sanford, N.C.).

“It’s ultimately every team’s goal as they go into the season,” Shipley said of the opportunity to win a state title. “So, to have gotten this far and have a chance to send the seniors away with a ring, it’s a huge deal for us.”

In July, Shipley (5-11, 200) received Clemson’s first offer to a 2021 running back after competing at the Dabo Swinney Camp in June. 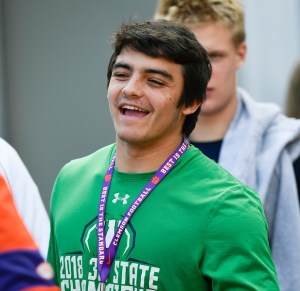 “To be as busy as they are — especially getting prepared for everything, being on the recruiting trail, going to see all their 2020’s, things like that — for Coach Pearman to have stopped by twice is a huge deal to me. My family, we understand how busy they are. So for him to do that, it’s huge to us.”

“I got on the phone with him last week after my game, just to speak to him,” Shipley said, “and we keep in really good contact weekly.”

Shipley’s play on the field has caught the attention of nearby Carolina Panthers star running back Christian McCaffrey, who recently sent Shipley a message letting him know that he’s been keeping up with him.

“It was definitely really surreal,” Shipley said of hearing from McCaffrey. “My mom was with me when it happened. You can talk to her, ask her, I was definitely shocked that he reached out to me. I’m very thankful for it, just to see that he’s noticing what I’m doing in my community. It’s a huge deal.”

Many have been watching @BigDubFootball as they continue their defense of a state championship, and star RB @willshipley2021. Apparently #Panthers star RB @run__cmc has been watching too. pic.twitter.com/zm4n4PjjyM

Shipley admires and crafts his game after McCaffrey, an MVP candidate who leads the NFL with nearly 2,000 all-purpose yards.

“I’ve watched just about every clip of film on him that you can that’s open to the public,” Shipley said. “I love watching him. I watched him when he was at Stanford. I’ve gone back and watched all his high school film. Just to have someone like that to look up to that carries himself so well on and off the field… For him to reach out, it’s definitely someone I try to model my game after and someone that I look up to.”

Shipley has compiled an impressive offer list that features Clemson and many other major programs such as Alabama, Ohio State, Notre Dame, Stanford, Georgia, Florida, Penn State, Wisconsin and Oregon.

He has yet to formally cut down his recruitment to a top group of schools but plans to do so after his season concludes.

“I’m going to spend this last week really focusing on winning a state championship,” he said. “My family and I decided we’re going to sit down and really start focusing on the recruiting side of things. I think probably soon after my season ends, I’ll have a narrowed group of schools that I can really focus on. But as of right now, I don’t really have that narrowed specified group.”

Last week, Shipley was named the 2019 N.C. Gatorade High School Football Player of the Year after rushing for 1,639 yards and 25 touchdowns, to go with 509 receiving yards and nine more scores through the air, in 14 games.

“It’s a childhood dream come true,” Shipley said of the honor. “As a kid, I would always look up to people who got that. Even last year, for (current UNC QB) Sam Howell to get that, I kind of looked at it and was like that’s something I want to do. So, to be named that with such a great pool of competition in the state of North Carolina, it means so much to me. I’m very, very thankful for it and I think it’s just going to push me to work harder and harder and hopefully win it again next year.”