'Big Dave' Uiagalelei on Dabo: 'Who wouldn't want their kid to play for a man like that?'

'Big Dave' Uiagalelei on Dabo: 'Who wouldn't want their kid to play for a man like that?'

“Big Dave” Uiagalelei is a very proud father, having helped raise a son in DJ Uiagalelei who is not only a special football player and a five-star prospect, but just as special of a person off the field.

“The part that I’m so proud of, and I sometimes pinch myself because I’m like Lord, you allowed me to be the father of this amazing young man who just shows humility, shows respect,” Big Dave told The Clemson Insider recently. “Everything he does, he deflects it. He wants to make sure it’s the team first.”

DJ, the nation’s top-ranked quarterback in the 2020 class, is set to sign his letter of intent with Clemson on Wednesday, the first day of the early signing period for Division I football.

Big Dave and his family have fallen in love with the Tigers and know DJ will be in good hands with head coach Dabo Swinney and his staff.

“We love them. They’re amazing. They’re great men, great morals… Who wouldn’t want their kid to play for a man like that?” Dave said. “Football is not everything to him. That’s the part that DJ loves the most, that he was more about his teaching about life in general – being a better father, being a better husband, being a better man. It’s not just all about football, and that’s what drew DJ to Clemson, totally the faith thing. That’s what spoke volumes to DJ.”

Clemson is a long-distance trip for the Uiagalelei family from their hometown of Bellflower, California, which is about a half-hour away from Los Angeles.

But DJ’s parents plan to travel from the West Coast as much as they can to watch DJ play at Clemson, while also making sure they are staying around to support their other son, Matayo, who just finished his freshman season at St. John Bosco.

“Oh, heck yeah,” Dave said of attending DJ’s games. “Maybe not every game, but definitely. I’m hoping my wife can make it to every game because I have another son here in high school at Bosco. A lot of people assume we’re going to move there. I’m like no man, we have to give the same attention to our older son to our younger son. Same love, same support. This is not an all-DJ show type deal here. It’s DJ and Matayo’s show. We love both our boys equally and support them equally.” 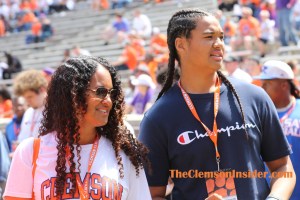 DJ announced his commitment to Clemson on May 5, his mother’s birthday. The No. 2 overall prospect in the 2020 class regardless of position chose Clemson over offers from Oregon, Oklahoma, LSU, Alabama, Georgia and dozens of other major programs.

In this day and age where it has become common for college football players to enter the transfer portal at the first sign of adversity and seek stardom elsewhere, DJ decided to play for the Tigers knowing full well he would have to compete for at least one season with Trevor Lawrence, who will be a junior next year.

DJ could have gone to a school where a starting job would have been guaranteed from day one, but he wanted to go to Clemson without a doubt and did not let the presence of Lawrence discourage him from following his heart.

“It starts from the beginning,” Dave said. “It’s the way he was brought up. You’re always going to have to compete, whether it’s getting a job or on a baseball team or football team. You can run all your life or you can just face it head on, and that’s what we’ve kind of taught our kids, to just face the adversity head on and just go out there and compete and try to win a job.

“I get a lot of people asking me, why didn’t you guys go to Oregon where you’re starting out or go to LSU or USC and starting out. But it wasn’t about starting for DJ. It’s not about playing time for him. It’s about going to a place where he knows he’s going to be challenged and basically get developed and ready for the next level – not just in football, but in life in general. And Clemson checks all those boxes.” 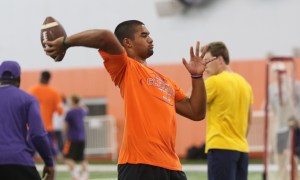 DJ Uiagalelei at the Dabo Swinney Football Camp in June 2018

As a senior at St. John Bosco this season, DJ passed for 4,225 yards and 48 touchdowns with just two interceptions, while also rushing for over 400 yards and seven more scores. Last Saturday, DJ accounted for five touchdowns as he led his team to the CIF Open Division state championship in his final high school game.

DJ finished his prep career with more than 10,000 passing yards, but if you ask Big Dave, the statistics are not important to his son.

“All that matters to him is just being a great teammate to his team and helping them win. Because wins and losses, that’s all that matters to him,” Dave said. “So, that’s the best characteristic part about my son that I love. He is the type of kid that doesn’t want any red-carpet treatment and he wants to do whatever it took for the other older guys, whatever route it took for them to achieve what they had to do, my son will go through the same thing. He doesn’t want any special treatment, he doesn’t want none of that.

“If I have to stand on this line and wear whatever color vest to throw signs in there, that’s my part and I’m going to do it to the fullest — that’s how he is. So, that’s the part that I love the most about him, and I know Dabo is getting a kid that is just a yes sir, no sir and willing to do whatever it takes to help the team win. If it’s for him to hold a book on the sideline and help his team, he’ll do that. That’s just how he is.”

DJ is also an outstanding pitcher on the baseball diamond who could pursue a career in the major leagues if he wanted to go that route.

While DJ will definitely suit up for the Tigers on the gridiron, it remains to be seen if he will play baseball at Clemson as well.

“He’s just going to play it by ear. He’s not really sure yet,” Dave said. “Right now the plan is to play both, but it’s really hard, especially for a pitcher and a quarterback. You understand that there’s no rest when your arm is sore. As a pitcher, it’s hard to throw the ball that fast and come back and still play football and then go back. So, I can see if he was like a first baseman or an outfielder. It just makes it really, for me, difficult. But he’s done it and he’s still, to me I’m thinking he’s still going to try to do both.”

DJ appears to have a blindingly bright future ahead of him at Clemson and beyond.

But regardless of what the future holds for DJ, his dad knows he will be successful in life because of the type of person that he is.

“I’m excited to see what he’s going to do, but the best part for me, it doesn’t even matter what he does,” Dave said. “If he doesn’t go pro, if he becomes a fireman, he’ll be the best fireman. If he becomes a teacher, he’ll be a great teacher. I believe whatever he decides to do in life, he’s going to be successful. So, I’m just happy for him. Great kid.”