Reed gets choked up talking about new cornerback signee

Reed gets choked up talking about new cornerback signee

Recruiting is all about relationships, and Clemson cornerbacks coach Mike Reed has built a special bond with Highland Springs (Va.) four-star cornerback Malcolm Greene, who signed with the Tigers this week.

Reed couldn’t help but get emotional when talking about Greene during Clemson’s Signing Day Show on Wednesday at the Reeves Complex.

“When you say ‘Clemson man’, I think of this young man right here,” Reed said. “I get a little choked up because I love the kid, and that is why I was able to go back in and recruit him. You talk about a young man who wanted to be here, who was patient… In a society that doesn’t teach patience anymore, for me to sit there and keep telling this young man, ‘Believe in the process, believe in the process.’ He did.”

Reed paused as he teared up, and the audience listening to him speak began to applaud.

“My wife tells me I get too emotional when I recruit, so you’ve got to be patient with me on that,” Reed continued after wiping away tears.

While Reed and the Tigers were high on Greene throughout the recruiting process, they initially did not think they would have space for him in the 2020 class after taking commitments from two other defensive backs, five-star cornerback Fred Davis and four-star safety R.J. Mickens, in the spring. 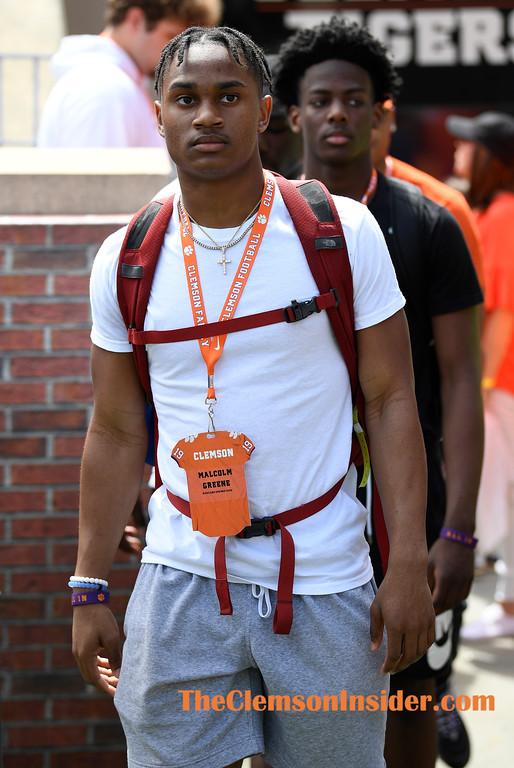 Greene (5-11, 185) visited Clemson for the spring game in April and wanted to commit then, but head coach Dabo Swinney could not accept his commitment at the time.

Indeed, things worked out for Greene and the Tigers, as a spot in the class became available a couple of weeks before the start of the early signing period (Dec. 18-20).

Swinney called Reed into his office and let him know they had room for another cornerback.

Greene originally committed to LSU in late October, but once Clemson came calling again, he jumped at the dream opportunity.

“We got Malcolm on the phone, and of course there was a little hesitation,” Swinney said. “His mom was not really sure, but I explained to her just kind of how we go about our business here, and he couldn’t wait to tell me yes, that he wanted to come to Clemson. This has been his dream.

“You’re getting guys that have grown up over the last decade watching this version of Clemson. It’s really cool to me that this is their dream, to come to Clemson.”

Greene made an official visit to Clemson last weekend before signing with the Tigers a few days later.

Swinney credited Reed for not giving up on Greene and staying in touch with him, even when it looked like there wouldn’t be a scholarship for him.

“He could have gone anywhere in the country,” Swinney said. “This is a great player and we don’t have a spot for him, and that’s a good problem to have. But Mike did a great job because he continued the relationship and he continued to hang in there and just say hey look, don’t give up on me.”

Greene was named the VHSL Class 5 State Defensive Player of the Year after helping Highland Springs to 11-1 record in 2019.

As a junior last year, Greene tallied 63 tackles, three interceptions and two caused fumbles while helping his team to a state championship and a perfect season.

“He’s obviously watched K’Von and the success and the transformation that’s happened in K’Von’s life over the last four years,” Swinney said. “K’Von’s graduating (Thursday) in three and a half years. It’s really special. So, Malcolm’s a corner, a dynamic player, going to be able to do a lot of things for us, and just super, super excited to have Malcolm.”