LSU, Clemson quarterbacks very familiar with each other

LSU, Clemson quarterbacks very familiar with each other

When Clemson and LSU meet in the College Football Playoff National Championship on Jan. 13, it will be just the fourth meeting between the two teams nicknamed the Tigers.

Clemson and LSU first met in the 1959 Sugar Bowl … a game the SEC’s Tigers won on the heels of their national championship in 1958. Clemson hung with the national champions, as Heisman Trophy winner Billy Cannon threw a 9-yard touchdown pass in the third quarter for the game’s only score.

The two teams met again in the 1996 Peach Bowl. Though Clemson scored first on a Nealon Greene 3-yard touchdown run in the first quarter, LSU rallied for 10-second quarter points and hung on to beat Clemson, 10-7, despite 151 rushing yards by running back Raymond Priester.

The last meeting between the two came in the 2012 Chick-fil-A Bowl. This time Clemson rallied to win the game with 12 fourth-quarter points. Kicker Chandler Catanzaro nailed a 37-yard field goal as time expired for a 25-24 victory.

Clemson quarterback Tajh Boyd, who was beat up all night, hung in the pocket and threw for 346 yards on 36-50 passing, including two touchdown passes to Deandre Hopkins, who caught 13 passes for 191 yards in his last game in a Clemson uniform.

Now the two Tigers get ready for an even bigger game than the previous three meetings. But it will not be the first meeting for LSU quarterback Joe Burrow and Clemson quarterback Trevor Lawrence. The two actually hung out at the Manning Camp in Louisiana last year.

“Yeah, we got to spend some time together. That was a fun week,” Burrow said. “We got to spend time with a lot of quarterbacks around the country.”

What Burrow remembers about Lawrence, and what he as seen from the Clemson signal-caller is how fluid he is, especially for his 6-6, 220-pound frame.

“He’s fun to watch. You can tell he’s a great competitor, tough guy,” the Heisman Trophy winner said. “I respect those kinds of guys.” 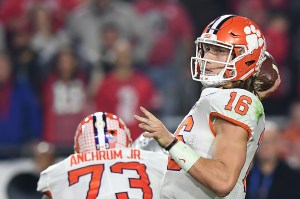 Lawrence has a lot of respect for Burrow, too. The LSU quarterback is coming off a game in which he threw 7 touchdown passes before halftime against Oklahoma. He later ran for a score in a 63-28 victory.

“Yeah, I when get a chance to watch, obviously, as much as I can, like big games. So, this season, just whenever a team like LSU, Alabama, Ohio State, Oklahoma, any of those teams are playing, I try to watch them,” Lawrence said. “I always see highlights and stuff. So, I try to watch that. But I just — I like a lot of things about his game. Just his pocket presence is really good. His accuracy, obviously, and just how he’s pretty mobile, too.

“He can extend plays and has a really good feel for pressure and doesn’t take too many sacks. I like a lot of things about his game.”

Clemson and LSU will meet for the fourth time, and the second time in New Orleans, on Jan. 13 in the CFP National Championship from the Mercedes-Benz Superdome at 8 p.m., ET.