NEW ORLEANS – Clemson fans consistently prove to be some of the nation’s most dedicated fans and 1998 alum Tim Cowan is no exception.

The Atlanta native, who grew up in Covington, Georgia, has been an IPTAY member and season ticket holder since the fall of 1999. Now he is gearing up for his fourth College Football Playoff National Championship Game and first with his son as the third-ranked Tigers prepare to face No. 1 LSU at the Superdome on Monday.

Cowan has served as the president of the Atlanta Clemson Club in the past and currently sits on the clubs board of directors. In Atlanta he drives around town sporting his Georgia license plate CU03 because he and fellow board member helped push legislation through the state house for Clemson license plates for Tiger fans in the Peach State.

If you have watched a Clemson game since 2010 chances are you’ve seen Cowan, the father of two is a broadcast and photographers favorite. Cowan sits in the third row on the 20 yard-line in Death Valley, clad in orange and donning a large wooden “D-Fence” sign he began bringing to Clemson games in 2010.

“In 2009 my neighbor and I were going to the game, so we cut the sign out of foam board at his house and it was fun,” Cowan said. “The next game I made it again and next thing you know I brought one to about every game and held the sign with whoever was sitting with me for the game.”

“After a while people asked me if I was bringing my D fence to the games and the lady behind me even said she needed to wear lipstick to look good on television,” he continued.

Cowan primarily used the sign at home games until his travel buddy and former Clemson football player John Thompson convinced him to break the sign out for the 2016 championship game in Phoenix. The two walked over to a craft store a couple of miles from the stadium and cut out a D fence before taking their seats. 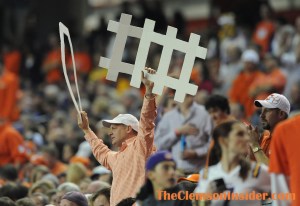 Clemson Superfan Tim Cowan during the second quarter of the 2012 Chick-fil-A Bowl Monday, December 31, 2012 in the Georgia Dome in Atlanta. (Photos by Bart Boatwright/The Clemson Insider)

Since that game, the sign has traveled to almost every game from Texas A&M to Boston College and all of the College Football Playoff games.

Cowan upgraded recently to a permanent wooden D fence and flew it out to this year’s Fiesta Bowl as Clemson rallied from an early deficit to knock off Ohio State, 29-23. He drives to New Orleans with his son on Saturday to bring the fence in hopes of stopping Joe Burrow and the high-powered LSU offense.

“It’s going to take a lot to stop LSU with Joe Burrow, but everybody said the same thing last year about Tua Tagovailoa and Alabama and we saw what happened. It will take a lot for that to happen and I don’t know how the game will go,” he said.

But for Cowan, Clemson football in this recent era means more than all the wins and championships. He takes pride in cheering for a team and coaching staff under Dabo Swinney that wins the right way.

“It’s about more than winning it means taking pride in the school, town, and alumni base. I’d give up the wins to make sure it is done the right way,” Cowan said. “The way we have done it is the most special part of it. It’s great to experience the way Dabo has been able to accomplish it.”

Now Cowan is ready to leave for the game with his son, who will be making his first trip to a championship game and cannot wait to show his boy the excitement and buzz surrounding a game of such magnitude.

Clemson kicks off at 8 p.m. (ET) on Monday night in the Superdome against LSU and if you pay attention look for a large wooden D Fence shared between a father and his son.