Phillips living out his dream at Clemson

Phillips living out his dream at Clemson

Defensive back Jalyn Phillips visited Clemson on numerous occasions during his recruiting process and knew early on he wanted to be a Tiger.

So once he received a long-awaited offer from Clemson the summer before his senior year, his decision to commit to Dabo Swinney’s program was an easy one to make.

Now with one college football season under his belt, Phillips says Clemson is exactly what he expected when he was a recruit and he is living out his dream of playing for the Tigers.

“It’s everything it was during recruiting,” he told The Clemson Insider recently. “Coach Swinney, the way he has built this program, it’s crazy. So, yeah, it’s definitely been a dream come true.”

After enrolling at Clemson last summer, Phillips earned a role on special teams and played in 14 games as a true freshman in 2019. The former four-star prospect from Archer High School (Lawrenceville, Ga.) was also able to get his feet wet on defense as a backup and made seven tackles in 47 defensive snaps.

“To be able to get used to this crowd, 80,000 people at the games — just getting used to it, getting the feeling, getting some experience under my belt, it’s been a blessing for real,” he said. “Trusting in Coach V (Brent Venables), Coach (Mickey) Conn and the plan that they have for us, it’s been really a blessing.”

The coaches put a lot on Phillips’ plate in his first year, asking him to learn both the strong and free safety spots along with the nickel and dime positions.

Phillips embraced that and handled it well thanks to coaching and the help of veteran safeties K’Von Wallace, Tanner Muse, Denzel Johnson and Nolan Turner. 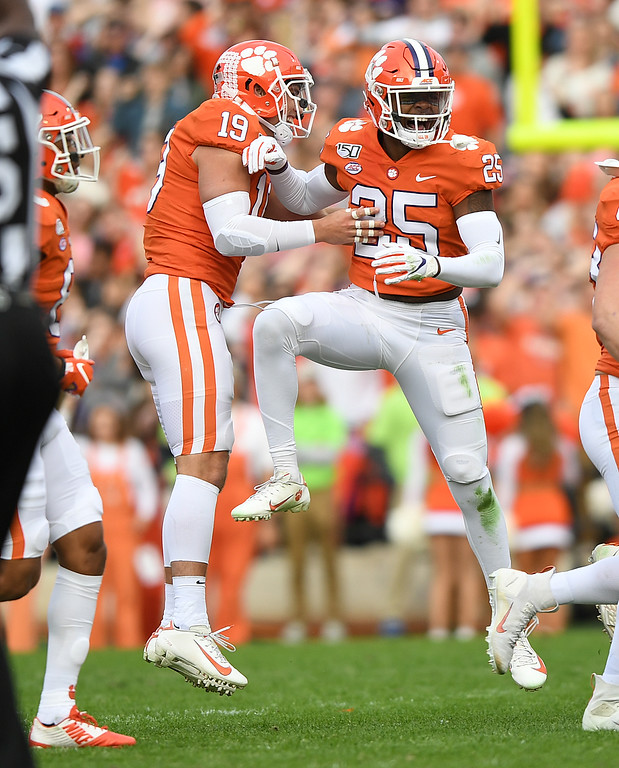 “It’s been a learning experience for sure, learning from all the leaders, safeties – K’Von, Denzel, Tanner, Nolan,” Phillips said. “So, just taking information from them day by day, learning from Coach V, learning new techniques that I didn’t learn in high school. So, I adapted very well.”

Phillips is working hard to master the mental part of the college game and hopes to be able to play faster when he is on the field next season.

“Your first year, you’re kind of anxious to get on the field, thinking a lot,” he said. “But this year, I want to improve on my game speed because I want to be able to know everything, know why a team’s doing this, know the game plan very well. So, just working on my speed of the game.”

Phillips developed physically during his freshman year as well, bulking up through the Tigers’ strength and conditioning program.

“I came in around 205, but I wasn’t really much muscle,” he said. “I weigh about the same, but I’ve definitely put on much muscle and gotten very stronger, being in the weight room during workouts and everything like that.”

With Wallace, Muse, Johnson and Isaiah Simmons all moving on from Clemson, there is an opportunity for Phillips to step up and make a significant impact for the Tigers in the secondary next season.

Phillips says Clemson fans can expect to get his full effort every time he takes the field:

“They’re going to see me work, be the best that I can be on the field and off the field as a person, just doing everything for this program, for Coach Swinney – just giving them my all.”