Though Clemson lost for a second consecutive game this past Wednesday night at Virginia, it ultimately could be a blessing in disguise.

The Tigers might have seen the maturation process of its young point guard take a big step forward in Charlottesville, Virginia. Freshman Al-Amir Dawes gave Clemson a spark it needed in the second half as the Tigers nearly rallied to beat the Cavaliers for the first time in seven years.

Clemson, who will host Notre Dame today (6 p.m.) at Littlejohn Coliseum, trailed by 12 points at the break and scored just 14 points in the first half. However, in the second half, Dawes’ energy and ability to penetrate and create looks for his teammates against Virginia’s No. 1-ranked defense nearly got the Tigers over the top.

Clemson (11-11, 5-7 ACC) scored 30 second half points and had four opportunities late in the game to either tie or take the lead. The Tigers outscored Virginia 30-25 in the second half.

“I thought Al played exceptionally well against Virginia,” Clemson head coach Brad Brownell said. “He was aggressive. He was attacking the paint. He made some shots in there, made a couple of threes. He still needs to shoot it a little bit better and more consistently to be a really good player.”

Brownell and the Tigers are hopeful the confidence Dawes gained against Virginia can continue his improvement. The freshman made 5-of-12 shots and scored 11 points, while also grabbing 11 rebounds.

“What was equally evident was his ability to defend. He was getting through, around and over ball screens within the zone. He was doing it some in man,” Brownell said. “I thought his energy level gave our team a jolt.

“I thought he was the guy that got us going. That’s kind of how he is. He is an energy bug.”

So far this season, Dawes is averaging 7.8 points per game, including a career-high 19 points against Alabama A&M. A former 4-star recruit, he has played in all 22 of the Tigers’ games and started 17 of them.

“He is one of those guys that has great pace. You can’t coach that, guys just have it,” Brownell said. “It’s kind of a joy of playing the game that he has, but it is also the speed. I thought we needed that in the game, and I thought he was the guy that kind of got our motor going as a team.”

Clemson hopes Dawes’ motor can get it going tonight in an important ACC contest against Notre Dame that the Tigers desperately need to win.

At look at Notre Dame from our friends at Irish Sports Daily.com 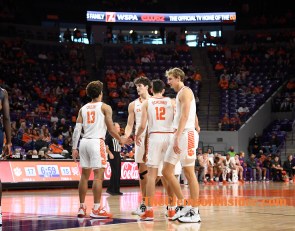