Clemson standout playing for his dad

Clemson standout playing for his dad

Meredith has dedicated the 2020 season to his late father

As he stood alongside his teammates during the National Anthem Friday night at Doug Kingsmore Stadium in Clemson, Kier Meredith could not help but get a little emotional. Not only was the junior coming back from another injury that held him out for most of the 2019 season, but for the first time in his baseball career, he was playing without his father watching in the stands.

Meredith’s father, Tracey, the man who introduced him to the game he loves so much, passed away last summer after an extended illness.

“My emotions were a little bit everywhere,” Meredith said. “I tried to keep myself composed, but I let it out a little bit during the National Anthem. I teared up a little bit. I tried to go out there and play for him. Baseball was mine and my dad’s thing.

“Ever since I was five years old, we have been driving up and down the road going to travel ballgames. That was just our thing. So, going out there without him tonight, for the first time, that was tough. But I know he was here with me. I just tried to go out there and have fun and played for him.”

Meredith honored his dad by going 2-for-3 at the plate with a walk and a run scored. His run in the bottom of the fifth inning put the Tigers up for good in their 5-3 victory over Liberty on opening night.

“It motivates me a lot, but it also just kind of takes the pressure off of me and allows me to go out there and have fun and play loose.”

In the preseason, Clemson head coach Monte Lee bragged several times Meredith is as healthy as he has been since he arrived at Clemson in the fall of 2017. The Winston-Salem, North Carolina native looked like in the season opener.

“I feel great. I feel the best I have since I have been here,” he said. “I am ready to roll and, knock on wood, hopefully we can make it a full season.”

Injuries have forced Meredith to miss most of his first two years at Clemson. He has played in just 22 of the Tigers’ 124 games during his brief career to this point. Before being injured, he played in just 13 games as a freshman and last year he played in nine games before injuries sidelined him again.

However, Meredith stayed positive through it all and leaned on his faith to get him through the tough times.

“I know I have to show up every day and still be the same person, still be a great teammate. I try to be the best teammate that I can and take it one game at a time.”

In the bottom of the eighth inning, with the Tigers up 4-2, Meredith displayed why having him healthy and in the lineup is so important to Clemson. The junior executed a perfect bunt on the first base side and then showed off his speed as he outran the pitcher to the bag for a base hit.

“It felt great. I loved doing that,” Meredith said. “I felt like I was back in my old days. So, when I was laying it down, I said, ‘Oh my God! The bunt is there so beat the pitcher to the base and you will be good.’ It was exciting.”

And he knows his dad was watching from Heaven and was excited for him. 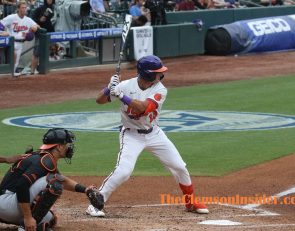