Background on how Clemson-Georgia game in 2021 came about

Background on how Clemson-Georgia game in 2021 came about

Clemson and Georgia will each be allotted about 27,000 tickets

When Clemson and Georgia started talking about the possibility of meeting on the football field in 2021, Clemson wanted to make sure this was the best thing possible for Clemson.

“We are not going to make a bad deal for Clemson or the university,” Clemson athletic director Dan Radakovich said to The Clemson Insider Tuesday afternoon. “We are looking at this being a positive for us.”

Radakovich said it was if all the planets aligned perfectly on how Clemson and Georgia were able to renew their long-standing rivalry three years earlier than expected. Both schools, along with the Charlotte Sports Foundation, announced Tuesday they will kick off the 2021 football season on September 4, 2021 at Bank of America Stadium in Charlotte.

Though they are still working out some of the financial guarantees in the deal, Clemson and Georgia will be allotted somewhere around 27,000 tickets to sell to their fan bases.

Both schools are giving up a seventh home game to make the 2021 meeting happen. Clemson roughly makes about $3.5 million per game on ticket sales alone.

“I don’t have those things at my fingertips, but it is going to be (okay),” Radakovich said when asked about the financial aspect of playing the game in Charlotte. “If we are able to, as we think, have a great crowd and sell the tickets that are allotted to us to the game, we should be in a good spot.”

Clemson was supposed to play Wyoming on September 25, 2021, but that game has since been removed from the schedule. The Tigers will also host SC State (Sept. 11) and UConn (Nov. 13) as non-conference home games in 2021 and play at South Carolina (Nov. 27).

Georgia removed a home date with San Jose State off of its 2021 schedule to accommodate the Clemson game.

“When this whole thing came about, it was kind of a really good alignment of the planets,” Radakovich said. “Number one, it was an incredible opponent opportunity with Georgia. A close, nearby venue, with Charlotte, as it turned out, and it really kind of gave an accompanying neutral-site game for the game that had already been scheduled for 2024.

“The 2021 season was a difficult year from a Power 5 opponent perspective because of how Notre Dame came into the league a few years ago. It really did not give us a partner to play in either ’20 or ’22 with a potential partner in ’21.” 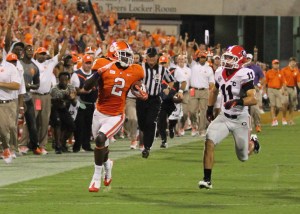 Clemson’s Sammy Watkins breaks free for a long touchdown in Clemson’s win over the Bulldogs in 2013. Clemson and Georgia most recently split a home-and-home series in 2013 and 2014, with each school defending its home turf in a pair of Top 20 matchups. (File photo/The Clemson Insider)

Radakovich said it was difficult for Clemson to find someone to play one year, for example in 2021, and not be able to return the favor for another three or four years. That is how the Georgia game in 2024 came about because Clemson had the ability in even number years to actually play a neutral-site game.

It becomes more challenging for Clemson in an odd-number year due to playing the Gamecocks in Columbia.

“We did an awful lot of soul searching here before we went down the road of saying, ‘Okay! Let’s see if we can find an incredible game that is fairly close by to be able to give up a home game,’” Radakovich said.

Radakovich told TCI talks with Georgia about playing a game in 2021 began in October and picked up steam in January.

“So, this is a little bit of an anomaly, but certainly, from a strength of schedule perspective, from an historical rival perspective and from a fairly close by geographical perspective, playing this game against Georgia in Charlotte made a lot of sense,” the Clemson athletic director said.

Playing the game in Charlotte became a target destination pretty earlier in the conversations.

“Greg did a lot of that work. We both mentioned Charlotte quickly,” Radakovich said. “We had a few discussions with some other venues that maybe were not as geographically positive as Charlotte was, but at the end of the day when you put all of the factors together, Charlotte made the most sense.” 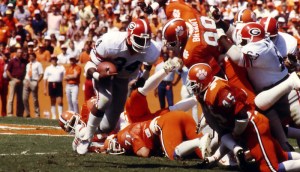 Georgia running back Herschel Walker (34) is corralled by linebacker Jeff Davis (45) and the Clemson defense in the 1981 Clemson-Georgia game. In back-to-back years in 1980 and 1981, the winner of the Clemson-Georgia contest went on to win the national championship. Georgia earned a 20-16 victory against Clemson and a national title in 1980, followed by Clemson defeating Georgia, 13-3, en route to a national title in 1981. (File photo/courtesy Clemson Athletic Communications)

The Clemson-Georgia rivalry was one of the nation’s best from 1977-’87 as the two teams each won five games, lost five and tied once in the 11 meetings.

When renewing the rivalry game three years earlier than expected appeared to be a possibility, Radakovich said both Clemson and Georgia wanted to do everything they could to make it happen.

“That really was one of those planets that aligned, the fact that it was Georgia,” he said. “That allowed the conversation to continue to move ahead because now with this game being scheduled, we play Georgia six times in 13 years. That is something that our fans really enjoy.

“It is a great game for both football programs and both universities. We are excited about that opportunity. Certainly, the idea of being able to play Georgia, a school, as the crow flies, is about 90 miles away. That is a good thing for us.”

Powdersville High School’s Jalen Rambert is one of the top sophomore prospects in the Palmetto State and one of the most highly regarded linebackers in the class of 2023. The 6-foot-2, 240-pounder is also (…)