For the first time this year, Clemson’s pitching struggled.

The Tigers allowed a season-high five runs and 14 hits as East Tennessee State beat them 5-3 Tuesday at Doug Kingsmore Stadium in Clemson. It was the Tigers’ first loss of the season.

Prior to Tuesday’s game, the most runs and hits Clemson pitching had allowed this season was three runs in the season opener against Liberty and eight hits against Stony Brook this past Saturday. The Tigers came into Tuesday’s game ranked second in the country in ERA at 0.70.

In all, Clemson used seven pitchers. Nick Hoffmann suffered the loss on the mound after he gave up one run on three hits in 2 1/3 innings of work. He came in relief of starter Mack Anglin, who left with two outs in the third inning.

Clemson had a chance to tie the game late when Dylan Brewer led off the bottom of the ninth inning with a single and got to third on a Kier Meredith double with two outs. However, Davis Sharpe flew out to centerfield on a 3-2 count to end the game.

The Tigers had 11 hits, but left nine runners stranded, including three innings with runners on second and third base.

“We had some opportunities. The bottom line is we had some opportunities to tie the game up,” Clemson head coach Monte Lee said. “We had a runner on second (in the sixth inning) with a lead-off double with Bryar Hawkins and failed to advance him there. And then Brewer in that inning lines out to first base so we failed there. We had second and third earlier in the ballgame and hit a ground ball back to the pitcher and had an opportunity to get another run in there.”

Adam Hackenberg doubled down the left field line to score Pierce Gallo and Meredith to tie the game at 2-2. Gallo singled through the left side to lead off the inning and then Meredith reached on an infield hit to short.

Hackenberg’s one-out double came after Davis Sharpe loaded the bases with an infield hit to third base.

ETSU retook the lead, 3-2, in the fifth inning when David Beam doubled down the left field line to bring home Cade Gilbert with one out.

The Buccaneers extended their lead to 4-2 in the top of the seventh inning when Holt Jones walked in a run with the bases load and one out.

Clemson (7-1) got a run back in the bottom of the seventh after Elijah Henderson drew a one-out walk and scored after a wild pitch got him to second and Meredith brought him home with a base hit through the left side.

The Buccaneers added another run thanks to an RBI single from Markell Graham for a 5-3 advantage. The hit to third base scored Jackson Greer.

Meredith led Clemson at the plate with a 4-for-5 afternoon and an RBI. Sharpe also had three hits. He was 3-for-4.

The Tigers will get back to action on Friday at 7 p.m., when they visit rival South Carolina in Columbia in the first of a three-game series against the Gamecocks. 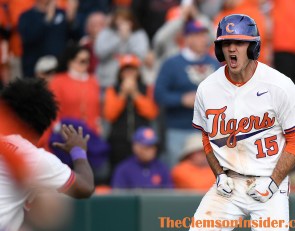