During the game’s final timeout, and Clemson up by a point, head coach Brad Brownell instructed Al-Amir Dawes if Florida State scored to get the ball out and go make a play for his team.

“Through my head, I was like, ‘I’m just going to get it and go,’” Dawes said while smiling.

And that is what he did.

After Florida State’s Trent Forrest made a jumper in the lane with nine seconds to play to put his team up one point, Dawes took the inbounds pass and weaved his way through the Seminoles’ before scooping up a shot that hung on the front of the rim for just a moment before dropping in with one-second left.

Dawes’ basket lifted the Tigers to an improbable 70-69 victory over No. 6 Florida State at Littlejohn Coliseum on Saturday, their third win over a top 10 team this season.

“The outcome was going to be the outcome and that’s what happened, so I am very excited for it,” Dawes said. 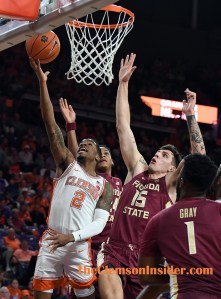 The freshman should be excited. His buzzer-beating shot, to go along with his 18 points, is what Clemson (15-13, 9-9 ACC) needed to keep their postseason hopes alive. A loss to the Seminoles would have ended those aspirations, but now, with two regular season games remaining against Virginia Tech and Georgia Tech and the ACC Tournament, the Tigers still have an opportunity to make it to some kind of postseason tournament.

“I am really just happy for my players and the way they have battled all season,” Brownell said after the game. “They did not play as well (at Georgia Tech) and got after it the last couple of days and just tried to put a plan together to give our guys a chance.

“I thought our guys made some big-time plays.”

Especially Dawes and John Newman, who led the Tigers with 18 points. Newman’s jumper in the paint with 56 seconds to play put Clemson up 67-65. Newman was 6-of-13 from the field and was 5-of-6 from the foul line.

“Everyone is telling me to be aggressive and just be myself, and that was me listening to them today and trusting the work I’ve put in,” Newman said. “They always tell me I put in too much work to not shoot the ball, so I shot the ball. I feel like we’re at our best when I do.”

The Tigers needed Newman to shot the ball because Florida State (24-5, 14-4 ACC) did not allow Clemson’s leading scorer, Aamir Simms, to do it. Simms scored just five points, but he only got up three shots all afternoon.

But with Simms jammed up, the Tigers went to Dawes and Newman who came through for them at the end. Dawes’ last-second layup on Saturday allowed Clemson to beat three top 6 teams for the first time since the 1979-’80 season.

“Al-Amir was terrific at different parts of the game,” Brownell said. “On the play at the end of the game, we just decided to let him go and see what would happen. I was just screaming to go to the basket, and he went in there and made an unbelievable play. I’m extremely proud of our guys.”

Clemson’s next game is at Virginia Tech Wednesday night. Tip is set for 7 p.m.

Brownell: 'Could be' more fingers pointed among coaches amid NIL ambiguity