Swinney explains why Higgins needed to ‘rest’ at NFL Combine

Swinney explains why Higgins needed to ‘rest’ at NFL Combine

Clemson head coach Dabo Swinney thought all seven of his former players who participated in last week’s NFL Scouting Combine in Indianapolis helped themselves for April’s NFL Draft, including wide receiver Tee Higgins, who did not participate in any of the testing or on-field drills.

Swinney indicated Higgins’ hamstring was not quite where it needed to be, which explains why Higgins’ camp said he decided to “rest” when the skills-and-drills portion of the combine began.

“Obviously, Tee’s ham wasn’t quite where it needed to be. He will be ready to go here soon, and he is going to be great,” Swinney said.

Here soon will be at Clemson’s Pro Day a week from Thursday (March 12) at the Indoor Practice Facility in Clemson.

As for the other six players who did work out at the combine, Swinney was pleased with what he has heard about corner A.J. Terrell. He officially ran a 4.42 in the 40-yard dash.

“For some reason, I think some people didn’t think A.J. could run or something like that, but he can run,” the Clemson coach said. “He really helped himself.”

Swinney felt offensive linemen Tremayne Anchrum and John Simpson both did well in their workouts and in their interviews, while safety K’Von Wallace showed off his abilities as a safety. He was graded as one of the best safeties at the combine. 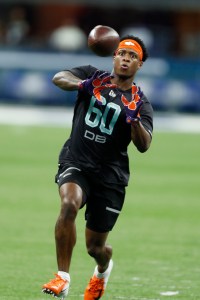 Muse was one of the talks of the combine. A lot of the draft experts were talking about him moving from safety to linebacker in the NFL prior to the combine. But after his combine workouts, and his impressive 40-time, some are thinking he is a guy that can play both, which makes him a little more valuable in the draft.

Then of course there is Isaiah Simmons’ performance. In front of a national audience on NFL Network, Simmons ran a blazing 4.39 40-yard dash on his first attempt, which is especially impressive considering his 6-foot-4, 238-pound size. It is the second-fastest time by any linebacker at the combine since 2006, behind only Shaq Griffin’s time of 4.38 in 2018, according to ESPN Stats & Info.

“Isaiah is what we all know, he is just a freak,” Swinney said. “He is one of the most unique talents you will ever see. Him coming back and having that fourth year to really develop, he probably would have been a second-round pick last year. Him coming back and really becoming a more complete player, it is amazing what he has been able to do.

“I am excited for all of them and I look forward to seeing them here next week.”