The former five-star prospect has stood out to coaches and players alike with his performance through the first several spring practices.

Offensive coordinator Tony Elliott has certainly taken notice of Murphy while watching him play against the offense.

“I tell you the one that’s really caught my attention on the defensive side – obviously (Bryan) Bresee is as advertised, but he’s been a little bit limited with the knee – but Myles Murphy,” Elliott said following Wednesday’s practice. “Oh my gosh, that guy there … he’s definitely as advertised. He’s really flashed so far. So, he’s going to push those other guys – just from my perspective – at that position.” 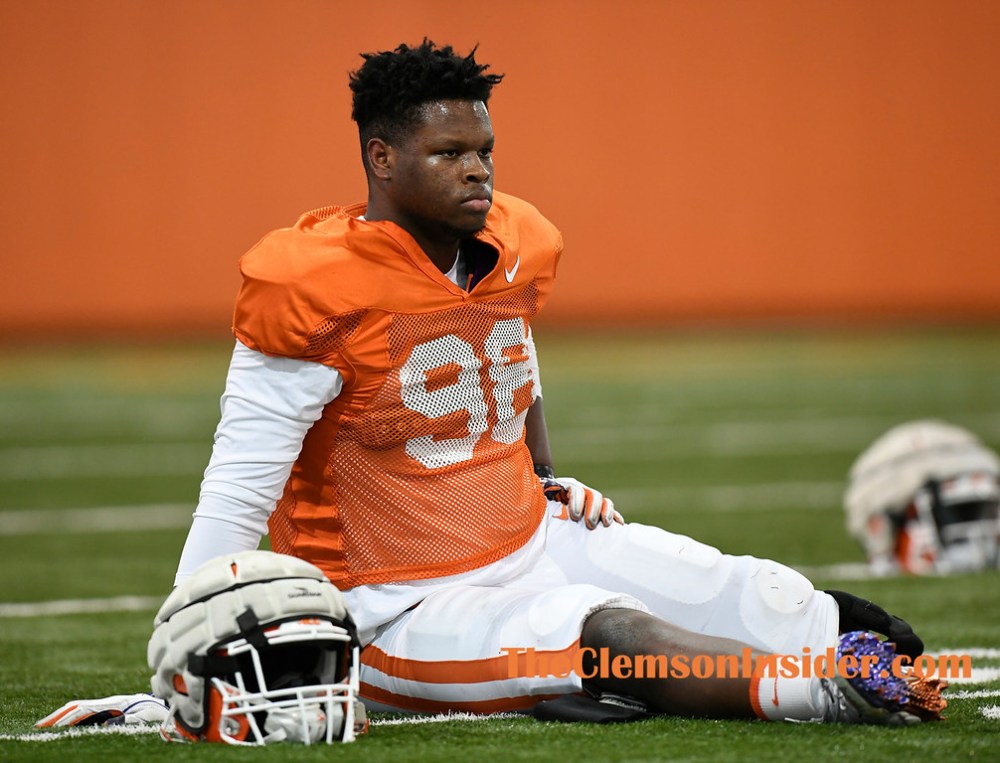 Murphy was a consensus top-15 national prospect coming out of Hillgrove High School in Georgia, and redshirt sophomore defensive end K.J. Henry – whom Murphy has been working behind at D-end – can see why he was so highly touted.

“Just God-given talent,” Henry said. “First off, it’s something you can’t explain. I look at him, I’m like, ‘Whew, I did not come in looking like that,’ you know what I’m saying. And he’s just so smart, long, athletic, fast. He’s definitely one that we love to have in our room. Glad we don’t have to play against him. But just a great kid. I met his mom the other day. So, great family that we brought in here, and he’s going to be a great player for us.”

Defensive coordinator Brent Venables can tell that Murphy is not overwhelmed by the speed of the college game, which is uncommon for a freshman who just arrived on campus a couple of months ago.

“The game’s slow for him, all things considered. Just comparing apples to apples, the game’s slow,” Venables said. “He’s been very well-coached. He comes with really good fundamentals, knows how to play low and with leverage. Very explosive, he’s long. He’s not only got good linear speed but good lateral movement and quickness, and he sees things fast. I would say like Christian Wilkins could see the game fast, and a lot of times you don’t want guys to see too much. But some guys just naturally, they can see a lot, but they still do their job well.”

The 6-foot-5, 265-pound Murphy did his job very well in high school, recording a total of 108 tackles, 35 tackles for loss and 17.5 sacks over his final two seasons at Hillgrove.

Murphy’s combination of strength and athleticism has really jumped out to Venables in the early going of spring practice.

“He’s strong,” Venables said. “I don’t know what his weight-room strength is. I haven’t really asked the strength coaches there, but he plays strong. He’s a good, strong point-of-attack guy, which for some freshmen, they’re not able to do that. That’s something that comes on a little later rather than sooner, but that’s been good as well. I think he’s got some natural ability as a pass-rusher. Really athletic, can flip his hips. So, we’ve been pleased with Myles.”