Is Galloway playing a different position?

Is Galloway playing a different position?

Clemson tight end could play slot receiver this season, too

Clemson fans may see Braden Galloway in a different role at times during the upcoming season.

In addition to his primary duties as a tight end, Galloway told reporters Monday that he has been getting some work at the 5-man (slot) receiver position in spring practice.

“We’ll see. That’s the plan right now, though,” Galloway said of seeing some action at receiver in 2020. “I’m obviously a tight end, but then I am getting a few reps here and there at the 5-man.”

Galloway is 6-foot-4, weighed in at 248 pounds last Thursday and believes he has the tools to be a “matchup nightmare” for opposing defenders, regardless of where he lines up.

“I feel like I’m too fast for a linebacker, and I feel like corners are too small for me,” he said. “So, that’s just how I feel about myself. I’m confident in my abilities to go out there and make plays at receiver or at tight end.”

Clemson has plenty of able bodies at tight end with J.C. Chalk, Luke Price, Davis Allen, Jaelyn Lay and Sage Ennis along with Galloway, which is likely part of the reason why the coaches are giving Galloway a chance to utilize his talents at receiver as well.

“We’re very deep there, and we feel confident in every guy that’s here to be able to go out there and make plays,” Galloway said. “So, I’m just doing whatever’s asked of me and trying to do it to the best of my ability.”

Galloway explained the difference between lining up in the slot as a tight end and playing the 5-man position in the slot.

Galloway enters his junior season having recorded seven catches for 112 yards and a touchdown in 152 snaps over 14 career games. He had to sit out the entire 2019 regular season due to an NCAA suspension but returned in the College Football Playoff and finished the campaign with two receptions for 60 yards, including a career-long 42-yarder, in the national championship game against LSU.

So far this spring, Galloway has seen an uptick in production in terms of catching passes. 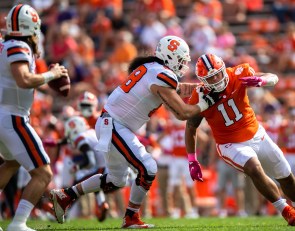 Etienne can set more than one all-time record on Saturday 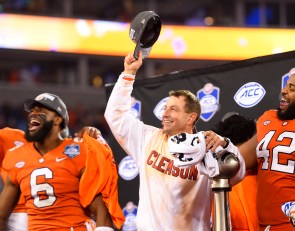 Clemson defensive lineman Bryan Bresee may be a freshman, but he is certainly not playing like one. The Maryland native has played in every game thus far for the top-ranked Tigers and even started a few. (…)

Etienne can set more than one all-time record on Saturday

By now just about everyone knows how close Travis Etienne is to breaking the ACC’s all-time record for career rushing yards. The Clemson running back needs just 43 yards Saturday against Boston (…)

GREENSBORO, N.C. – The 2020 Atlantic Coast Conference Football Championship Game will be played Saturday, Dec. 19, at Bank of America Stadium in Charlotte, North Carolina. Game time will be announced no (…)

Clemson defensive coordinator Brent Venables and the rest of the defense is back to work prepping for their upcoming matchup with Boston College, set for Saturday at Death Valley. While last weekend’s (…)

When Clemson head coach Dabo Swinney looks at Boston College, he sees a team that could easily be a 5-1 football team as opposed to the 4-2 record it will come into Death Valley with on Saturday. The Eagles (…)

Clemson linebacker Mike Jones thought he had a clear shot at the end zone when he intercepted a pass and raced to towards the Syracuse end zone in last week’s victory at Death Valley. Watch Jones describe his (…)

Being a running back for the Clemson Tigers has always been a big deal. Clemson has produced many great running backs through the years. Two-time All-American and ACC Player of the Year Travis Etienne is the (…)

Regardless of quarterback Trevor Lawrence’s future with the Clemson football team, one thing is certain, this will be his last year playing alongside All-American running back Travis Etienne in the (…)

There is no competition for Clemson’s starting spot at the boundary wide receiver position. At least that is what head coach Dabo Swinney said following Wednesday’s practice at the Poe Indoor Practice (…)

With Skalski out, what is next for Clemson at middle linebacker?