Higgins surprised he impressed so many at Pro Day

Higgins surprised he impressed so many at Pro Day

After electing not to work out or go through physical testing at the NFL Scouting Combine in Indianapolis a couple of weeks ago, wide receiver Tee Higgins was one of the headlining participants in Clemson’s Pro Day on Thursday at the Poe Indoor Practice Facility.[autotag]

The projected early round NFL Draft pick showed well in front of the coaches and scouts on hand and told reporters following the Pro Day that he is pleased with his performance.

“I feel like I did pretty well,” Higgins said. “I feel like I impressed more people than I thought I would. Going into today I felt like I just had to perform well and be me.”

Higgins clocked in at 4.54 and 4.56 on his two 40-yard dash attempts and recorded a 31-inch vertical jump and 10-foot, 3-inch broad jump. He also posted a 20-yard shuttle time of 4.25 seconds that would have ranked sixth among receivers at the NFL Combine.

Those numbers Higgins doesn’t really care about, however. He was more concerned with impressing during receiver drills and succeeded in doing so. 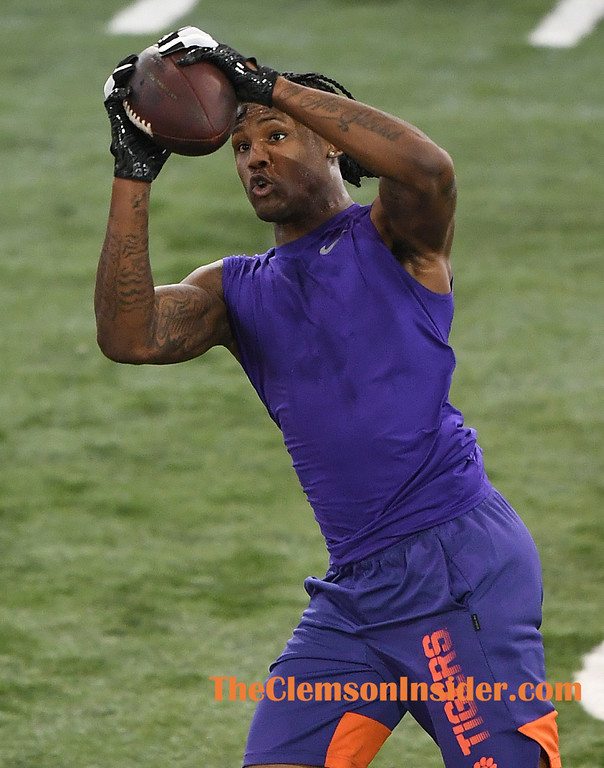 Higgins has been hampered by a hamstring injury, the reason he did not test at the combine, and admitted it tightened up on him after he ran the two 40-yard dashes.

“It’s nothing the treatment can’t fix,” he said. “I did it two weeks before the combine. That is why I didn’t do anything there, but I just got prepared for today and performed well today.”

Higgins said he will travel to Las Vegas for the 2020 NFL Draft (April 23-25) if he is invited to attend and plans to work out on the West Coast before then.

“I am training in California,” he said. “I haven’t been drafted yet so I still have a lot of work to put in, get better, work on my craft. When April comes around, when the draft comes around hopefully a team gets me.”

Higgins doesn’t have to worry about that, of course. It’s not a matter of whether he gets picked, it’s when.

Following a highly productive three-year career at Clemson during which he amassed 135 receptions for 2,448 yards and 27 receiving touchdowns, Higgins is expected to be taken in the late first or early second round.

“It is very exciting. I dreamed of this moment,” Higgins said of the NFL Draft. “Right now, I’ll just kick back and visit some teams and make them like me a little bit more with these interviews. I am just taking this moment in. Not too many people get this opportunity. It is a once-in-a-lifetime thing so I just have to enjoy it.”