‘Upset’ by Combine snub, Cervenka had something to prove at Pro Day

‘Upset’ by Combine snub, Cervenka had something to prove at Pro Day

Because he did not receive an invitation to participate in the NFL Combine, offensive lineman Gage Cervenka entered Clemson’s Pro Day on Thursday with plenty of motivation and believed he had something to prove to the NFL personnel on hand at the Poe Indoor Practice Facility.

“Oh, absolutely. I was kind of upset that I wish I would have gotten an invite to the combine,” Cervenka said following his Pro Day workout. “But at the end of the day, I played for a big university. This is a team that’s played for multiple national championships. Every year I competed for one, so we’re going to have a turnout of scouts and GMs and head coaches that are going to come here, so I’ll get the looks and things like that. So I wish I would’ve gotten it, but at the end of the day, I knew everybody was going to be here so I could just do it here. So I feel like I definitely had something to show.”

Cervenka was pleased with his Pro Day performance after pushing up 39 reps of 225 pounds on the bench press – a mark that would have ranked second among all players at the combine – while also recording a time of 7.59 in the L-Drill and running a 5.28 40-yard dash. 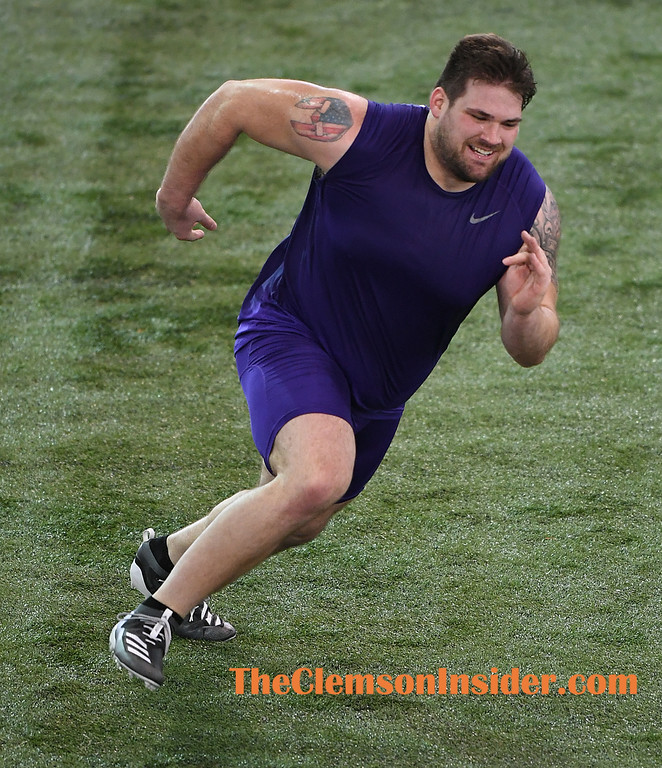 It’s no secret that Cervenka is a strong man, so going into the Pro Day, he was more focused on showcasing his athleticism and agility.

“Everyone kind of knew I was strong, so that was really never a question,” he said. “My thing was wanting to come in here and show my athleticism with the L Drill, shuttle and the 40 – kind of show guys that I can bend, I can move, I can change directions. So, that’s something I wanted to focus on, which I think I did very well … I felt good with change of direction. Some guys said I moved very well, so that’s something I was very happy with.”

Cervenka, who has been training in Atlanta, has a couple of individual workouts with NFL teams lined up ahead of the 2020 NFL Draft in late April.

“I have the Jets and the Saints right now,” he said.

Cervenka redshirted as a defensive tackle during his first year at Clemson in 2015 before switching to offensive line in August 2016. The Greenwood, S.C., native served as the backup center during the entire 2017 season before earning a starting role at guard in 2018 and then starting all 15 games for the Tigers last season.

A second-team All-ACC selection in 2019 who finished his Clemson career having played 1,749 snaps over 46 career games, Cervenka hopes to get the chance to continue his football career at the next level even though he did not grow up a big fan of the professional game.

“I was more of a college football guy,” he said. “I loved college football growing up, so I didn’t really watch a lot of NFL, so I think that kind of affects me a little bit. But I still have that dream of playing, and so the excitement of knowing that I have that opportunity that’s very close is huge and I’m just excited and looking forward to that. I don’t care where I play, I don’t care who picks me up, I just want to be able to get that shot to go out and prove that I can do this and that I’ve earned it.”

Clemson softball 'coming out with fire,' hopes to 'put on a great show' in first-ever Clemson Regional

Clemson softball will go about its routine similarly this weekend.  By this point, everyone knows that this won’t just be any ordinary series at McWhorter Stadium this weekend. The Tigers, the 10th overall (…)